As Americans celebrate their annual Thanksgiving Day turkey chowdown and NFL tryptophan-induced naptime bonanza, as retail slaves try to catch a few extra winks before going to work for Black Friday sales that start in less time than it takes to get all those wooden turkey breast splinters out of our teeth, and as boxers with fights in December curse the gods for making their efforts to make weight a thousand times harder, it’s time for another annual edition of The Southpaw’s look at the fighters who make your columnist happy, and terrible people in and around the sport who should be thrown out along with the green bean casserole and sweet potato disaster with the marshmallows, because friends don’t let friends eat green bean casserole and sweet potato disaster with the marshmallows. 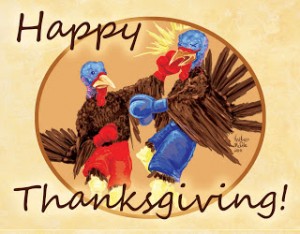 I’m thankful for ESPN2. No matter what anyone (me chief among them) may say about the woeful quality of Friday Night Fights this year, the simple fact remains that the Worldwide Leader hasn’t yielded to the temptation to try and replace its flagship boxing show, a sport that has in one form or another been airing on the network for all 33 years of its history, with mixed martial arts. Sure, there have been the occasional hair-pulling moments where a fight’s start has been delayed by women’s college softball or high school boys’ basketball or the Stevie Wonder Blind Mumblety-Peg Invitational (OK, that last one would be kinda awesome), but the fights have ultimately gone on, and as often as not they’ve been worth waiting for. Is it perfect? No, but it’s boxing on basic cable. Stuff like that needs to be cherished.

Meanwhile, a big plywood turkey breast to Roger Mayweather for fanning the damn flames of a fight with Manny Pacquiao again. In point of fact, whether Pacquiao and Floyd Mayweather Jr. throw down sometime in this life is irrelevant. The entire kabuki theater/three-ring circus behind these negotiations is so bothersome—especially when the media’s eager desire to lap up the rumors leads to something only slightly less annoying than an 11-man clone football team of Tim Tebows being covered by Skip Bayless—that at this point Floyd and Manny can get two vintage dueling pistols and shoot each other for all I care. In video games, they call this “vaporware”, and whenever vaporware finally gets released, the game always sucks. At this point, I wouldn’t bet on Floyd and Manny to be worth the sixty bucks to watch them. I’d rather see Floyd fight Timothy Bradley, because if they did that on May 4 of next year and the fight went as I described it in my mock preview (“Bradley-Mayweather Running Diary”, Southpaw #50), I might just land a studio commentator gig with Bernardo Osuna on TV because of what an expert I’d make sure everyone on the goddamn Internet knew me to be.

I’m thankful for Adrien Broner’s Twitter account (@AdrienBroner). The dude’s crazy. Or an evil genius. Or both. Whatever he is, it’s tremendously entertaining, and even better is the fact that Broner backs up his wacky talk in the ring by demolishing his opponents. The most fun fighter in the sport right now is a matter of opinion, but “The Problem” from Cincinnati (which I always thought was the city’s chili recipe, but that’s a different problem from Cincinnati) is making a strong case. I’d love to see Juan Manuel Marquez’s talent combine with Emanuel Augustus’ hijinks. Broner makes that sort of combination possible.

On the other hand, a heaping helping of Cranberry Sauce a la Bart (you know the stuff, and let’s all stop pretending it’s acceptable for anything other than heathens, desperately poor people and ignorant denizens of suburbia as a Thanksgiving condiment) for USA Boxing. Not only did our Olympic hopefuls disgrace themselves, their families, their country, and the ghosts of great Olympic teams past by completely failing to medal in London, but the utterly head-up-the-ass way that organization is run ensures that the US will be similarly blanked in Rio four years hence if things don’t change immediately and decisively.

Sadly, this is boxing. The only thing that is ever changed immediately and decisively at the administrative level is a judge’s employment status when he does not deliver the verdict asked for by the promoter. A sport planted in corrupt soil, grown in a corrupt atmosphere, and harvested by corrupt farmhands can only end up corrupting everything it touches. Short of completely abolishing AIBA and reconstituting the amateur game as a better representation of the pro game to follow (which will never happen), it is probably best if the United States stops fielding a boxing team at all.

Instead of kowtowing to this Olympic idiocy, let’s set up an amateur/youth boxing circuit in the US that is scored on 10-point must, four rounds for regular fights and six rounds for tournament finals, weight classes above the 105-pound level done as adjuncts to the pro equivalents (and weights below 105 as feeders as young fighters grow and mature) and an atmosphere of “the next big thing”. Kind of like those high school basketball games that introduced LeBron to a national television audience ten years ago. Maybe even air them on ESPN2.

But what do I know? I’m just a writer. The only thing that keeps me from being the biggest turkey of all is that guys like Steve Kim, Gabe Montoya, and Doug Fischer have had that spot locked down for years. This time next year, when I’m writing Southpaw No. 127 (this being the 75th installment), I’ll still have my integrity and professional pride. And I’m damn sure thankful for that.

Fox Doucette covers Friday Night Fights for The Boxing Tribune. His weekly column, The Southpaw, appears on Thursdays. Fan mail, hate mail, and turkey sandwiches can be sent to beatcap@gmail.com.