I come not to bury Manny Pacquiao, but to honor boxing.

On Saturday night and all through Sunday, there were a lot of boxing fans on social media sites and on boxing forums counting Juan Manuel Marquez’s perfectly-timed fight-ending overhand right hand as a blow for “real” boxing. For them, the face-first, unconscious Manny Pacquiao symbolized a return to sanity. 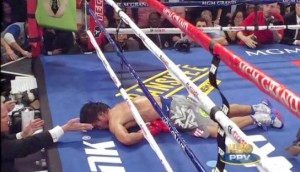 Seems like an odd reaction. But the internet was buzzing with this type of talk and with fans expressing this sentiment.

For the last four years or so boxing’s real, hardcore, long-time fans have had to share their Universo Pugilistico with a mass wave of stupidity, the likes of which this sport had never seen.

With the rise of Manny Pacquiao, came a tsunami of new fans whose boxing frame of reference only went back as far as the Bush II administration and whose devotion to their new boxing hero would be more of the cult leader-minion variety than athlete-fan. Many of the new Pacquiao imports would eventually develop into smart fans, many more would just get nastier and more aggressive.

Fueled by fake news from dim-witted, lowbrow Examiner.com-types, whose livelihoods depended on penny-clicks from rabid Pacquiao zealots, these new fans pushed forward and proceeded to hijack the sport.

When ESPN had their poll to determine the greatest fighter of all-time, Pacquiao’s legion of fans had their hero beating Robinson, Armstrong, and Ali easily…and blowing past Roberto Duran with the ease of Chris Arreola tearing through a beef burrito.

And forget about trying to have an intelligent discussion in any public forum or on any major website. If it was somehow Pacquiao-related, even marginally so, you could expect nothing but hate speech and nearly-illiterate, factually incorrect babble– and lots of it. Statement after statement, by the dozens and hundreds.

Like being forced to car pool to work with an overflowing carload of obnoxious, booger-flicking teenagers, things were not pleasant for boxing fans who had come to expect at least some logic and grammar mixed into their fight talk.

To many, it felt as though their sport was being taken over by people who, really, didn’t care a lick about it and didn’t care to learn.

As likeable as Manny Pacquiao was, as admirable as his accomplishments were, it was hard to embrace him fully because of all the mass stupidity that surrounded everything he touched and the smoke and mirrors aspect of his rise to glory (i.e. in-house matchmaking, pre-fight contractual stipulations, catchweights, fighting the losers bracket…).

Though he got plenty of hardcore fan respect in the first portion of his career, when he was going to war with the likes of Barrera and Morales, the mood changed a bit when Pacquiao hit lightweight and “Manny-mania” really started to rev up.

Within a year or so, and especially after his upset win over Oscar de la Hoya, everything seemed to revolve around Manny Pacquiao. Websites fought amongst themselves to accommodate the click-crazy wave of new fandom. Pandering to these new fans and their sensibilities became the norm. Any semblance of critical thinking seemed to take a back seat to Pacquiao public relations talking points.

Writers, who normally would be hard-pressed to find even marginal readership, suddenly found themselves making a living wage from lovingly-crafted Pacquiao puff pieces and unfiltered Top Rank propaganda. Legitimate writers were forced to address Pacquiao minutiae or be overrun by those who had no problem flooding the internet with blatant nonsense.

On TV, HBO made it well understood that they were in the Pacquiao business and, while critics brought up issues that made his rise to glory a little more Earth-bound, Jim Lampley was shouting “Bang! Bang! Bang!” in loving deference to a man who could, in their eyes, do no wrong.

Meanwhile, Pacquiao was Pacquiao. Trapped in the mass-hysteria of stupidity that his efforts inspired, the Filipino icon’s only crime was by association. And, like a king kept well-fed and happy by his inner circle of minions, he likely had no idea that the commoners were rioting outside the castle walls.

But when Marquez landed that perfect right hand, the castle walls of Pacland were breached and the angry rioters rushed inside, looting the king’s private quarters and desecrating everything previously held sacred.

The fight, itself, was a testament to all that’s right with boxing. Both fighters gave freely of themselves and left it all in the ring. If there was any doubt as to why both Marquez and Pacquiao are modern day legends, last Saturday’s six-round thriller confirmed the ring greatness of both men. There are also some legitimate fight-related issues to be discussed, including  the now-obligatory PEDs rumors and other assorted conspiracy theories.

But let’s save those issues for another day. For now, let’s just enjoy things as they were…and let long-suffering fight fans have their anti-Pacland catharsis.