In yet another addition to the slew of upsets registered so far this year (I know who’s really upset…Lookin’ at you, Pacland), Juan Manuel Marquez administered a hellacious right hand bomb straight from the heart of Distrito Federal, Mexico, that rendered the former 25 division champion de la casa brain dead for several minutes following the home-run shot that ended matters in the sixth. 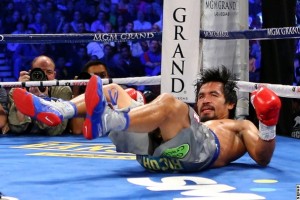 Ironically, this was the sharpest I’ve seen Pacquiao look in recent years. His fantastic in and out movement, his wonderful footwork and deceptive feints were all present as he was obviously prepared to paint a masterpiece. Unfortunately, the prospect of closing the book on the quadrilogy definitively proved to be too enticing for the overly aggressive Filipino and he walked himself into a perfectly timed counter and out of a mega money fight with Money Mayweather.

Now that the Floyd Mayweather/Manny Pacquiao dream fight has officially been scuttled, I think there is a case to be made for Juan to have a rematch with the sport’s best fighter. I know, I know. Their first fight was the single most one-sided statistical ass-whipping of all time.

I do, however, think it’s safe to say that things may be different now. Not that the outcome would be different per se, but the road there could be vastly more interesting now given the new founded conditioning of the WBO “Fighter of the Decade” or whatever the hell they’re calling him now.

Of course, there would be no denial of random blood and urine testing like there was for Pacquiao and Marquez’ fourth go-round.

Speaking of urine, I think it’s safe to throw this equation out there now: Hiring a strength and conditioning coach > drinking pee pee.

On the subject of strength and conditioning coaches, Freddie Roach was on record at the post fight presser on Saturday saying that Marquez is punching harder now than at any stage in his career, going on to say “…his body is very well developed, he’s very strong and very physical, a lot more than before and I think his punching power has improved.” He also said that he “doesn’t know anything about drugs” when probed deeper for his thoughts on the matter.

Seems like sweet irony to me, how about you?

Pacquiao doesn’t quite have the same pop as he did several fights ago. Granted, Manny’s power is a by-product of his speed and strength, but back when he had his first career transformation (around the time Alex Ariza joined on ahead of the David Diaz bout) he was looking like an absolute monster, crushing all in his path; they say that power is the last thing to go in an aging  fighter… Anyway, that is neither here nor there so I digress, for now.

By the way, how are everyones’ Pound for Pound lists looking now?

Between rounds five and six, HBO played the replays of Manny’s flash knockdown of Marquez (where the Mexican touched his glove to the canvas to avoid a splash down) and quickly cut to a shot of middleweight king, Sergio Martinez looking as exuberant as ever. The gesture, to me, was a nod to Martinez’ own bread and butter punch: the southpaw lead left hand which he used to great effect over Paul Williams in their rematch back in 2010.

The devastating punch that took Manny out got me thinking of other memorable and similar bombs of recent vintage…Pacquiao’s brutality of David Diaz immediately came to mind as the former lightweight champion crashed face first to the canvas after taking a series of shots in the center of the ring from the Pacmonster. The aforementioned knockout of 2010 where Sergio “Maravilla” Martinez dismissed The Punisher in two. Williams laid on the canvas unconscious with his eyes open for several tense moments after a perfectly timed counter left hand from Sergio bounced off his cranium and reverberated around the shocked-silent Boardwalk Hall. Of course, who can forget Ricky Hatton’s beheading at the hands of the Filipino fireball?

So, I think that the “Mayweather Curse” has officially been debunked, has it not? While it’s true that those who face the Pound for Pound numero uno are more often than not forever changed after their loss, some do, in fact regroup and go on to do extraordinary things. And by some I mean only Juan Manuel Marquez.

On a side note, in case you’re wondering where to get all the best picks for the biggest fights in the sport, the entire Boxing Tribune staff picked Juan Manuel to win on Saturday.