It’s like déjà vu all over again. This Saturday Amir Khan (26-3, 18 KO’s) will begin the second rebuilding phase of his career when he meets undefeated Carlos Molina (17-0-1, 7 KO’s) at the Sports Arena in Los Angeles. It will be Khan’s first fight back since suffering a fourth round stoppage at the hands of Danny Garcia in July. 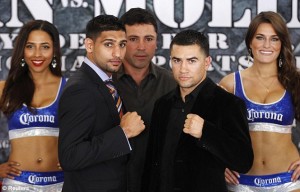 Khan, the former WBA and IBF light welterweight champion, has been under a microscope since 2008, when he was stopped in the first round by Breidis Prescott. Despite winning eight following fights and improving his overall skills under the tutelage of Freddie Roach, there was still the lingering question if he could take a punch. In July, Danny Garcia answered the question for us; after taking a beating from Khan for 2 ½ rounds, he turned the fight around with one punch, dropping Khan three times en route to a fourth round TKO.

Khan has since left Roach and taken up training under Virgil Hunter, who also trains super middleweight champion Andre Ward. Sources say Khan’s already shown improvement but at this stage it’s hard to imagine any drastic change in his fighting style. Khan’s always been a very good on the offensive side, while lacking in defensive and infighting ability.

In Carlos Molina, Khan is meeting an undefeated, newly crowned WBO Intercontinental lightweight champion. He’s the smaller, less experienced fighter and has decent boxing skills, but nothing near what Khan brings to the table. With only seven knockouts, he’s not considered a dangerous puncher; he’s gone the distance in his last five outings, so it’s hard to see him nailing Khan with a “home run” shot that can win him the fight but at this point with Khan you never can tell. Molina has however, taken a page from Danny Garcia’s playbook by looking to hire Angel Garcia to work his corner and oversee Khans hand wrapping. Angel Garcia is the father and trainer of Danny Garcia, and engaged in some pretty stiff trash talk related to religion, race, heritage, and nationality that many feel had got into Khan’s head prior to the Garcia bout and threw him off his fight plan. Nothing has been made official, but if this does become the case, it could give Molina the psychological edge he needs to improve his chances.

Khan vs. Molina will be televised live on Showtime, Saturday, December 15th at 10:30 pm EST.