Contrary to HBO and Top Rank talking points, this was never going to be a competitive bout. Even prime vs. prime, Arce would’ve been a long shot to score the upset. Now, though, several years past his prime and at least three 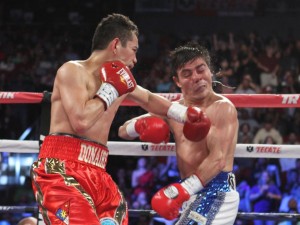 weight classes above his ideal weight, the chance of Arce winning was somewhere between nil and zilch.

Donaire began the fight cautiously, circling and looking for his spots. Arce was also cautious, hardly doing anything in the first round, staying out of danger and dragging out the HBO exposure for a little longer than many expected.

The true Arce came out in the second, after Donaire sent him to the canvas. Unfortunately for Arce, true Arce, the battler, is perfect for Donaire and, once the fight turned into a fight, it was just a matter of time before Donaire would close out the show.

The end came in the next round as two knockdowns brought down the curtain on Arce’s career and, possibly, sealed Donaire’s placement as Fighter of the Year.

After the bout, the 70-fight, 16-year veteran, Arce, officially retired and Donaire, as is usually the case these days, brought up the names of Abner Mares and Guillermo Rigondeaux as probable next opposition.