I want to like Nonito Donaire, I really do. The guy is extremely good. He’s charismatic, likable enough, and he has finally put together a year of solid performances against world class opposition. Hell, the guy might even get my vote for Fighter of the Year in this year’s upcoming Boxing Tribune Year-End Awards. 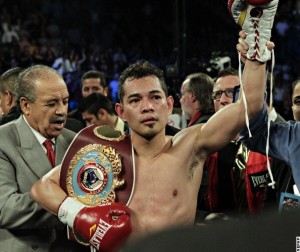 Given my disdain for fake press release narratives, I just have a hard time getting all ga-ga for a fighter who is so clearly being hard-sold to the masses at the expense of some basic realities.

Of course, every promoter is peddling their guys to some degree– that’s why promoters exist. But not everything takes hold, not everything gets completely co-opted by the fawning mass of lazy thinkers called the boxing media.

Promoter Bob Arum has been pushing Donaire hard– except for that brief period when Donaire tried to leave Top Rank and was branded a non-draw and minor leaguer by Arum. And since Donaire first laid out Vic Darchinyan in 2007, compliant members of the media have fallen all over themselves to make him a pound-for-pound superstar, even four years before he actually deserved the recognition.

Most recently, Saturday’s three-round farce of a bout with Jorge Arce was overlooked for the sham that it was and was actually passed along by way too many as a somewhat respectable bout.

Arce was pushed as tough, proud, and accomplished– all legitimate claims, but rarely was the actual story told. Donaire-Arce was nothing short of a human sacrifice. The Boxing Tribune had labeled it as such since the bout was first signed. A few dissenting voices, here and there, had also expressed the same opinion. But by fight time, the boxing media had done what it does best– sell the product of those paying their bills.

The biggest sales job surrounding Donaire, though, has to do with his year-round blood testing by the Voluntary Anti-Doping Association (VADA).

The press released story is that Donaire is the only fighter so far to agree to volunteer year-round random blood testing and, therefore, is the only athlete in boxing beyond reproach when it comes to suspicion of using performance enhancing drugs.

That’s pretty much the story sold to the media and passed along to the trusting masses.

The reality is not so simplistic or cartoonishly super-heroic.

Donaire’s strength and conditioning coach is convicted PEDs cheat, Victor Conte of Balco fame. Conte, as an adviser, helped to establish VADA’s testing protocol. The widely-sold angle is that Conte is now one of the good guys and, as Thomas Hauser wrote in his recent opus aeternum, has “moved to the side of the angels.”

But, think for one second. What if Conte is not fluttering around with the angels? What better way to beat the system than with the guy who helped make the system? Conte is the guy, by the way, who has bragged about any test being beatable. This is also a guy who has worked hard to ingratiate himself with the few members of the media still writing PEDs stories. He has worked to discredit any competition for VADA. Let’s also not forget that two of Conte’s athletes have tested positive for banned substances this year– Andre Berto and baseball player, Marlon Byrd (although no direct links between Conte and the illegal substances have been made in either case).

So, in short, let’s back this thing up:

If you ask me, this has the potential to be the greatest sports con of all-time. On the surface, it sure screams of first ballot entry into the hustler’s Hall of Fame.

This is not to say that Donaire is complicit in the hustle– or that there’s any hustle at all. It’s very possible that all of this is on the level.

I’m just saying that there are plenty of red flags and plenty of things worth thinking about before simply repeating what Top Rank publicists have to say.

It’s absolutely absurd to think that boxing’s biggest and best minds just suddenly lost the ability to think critically when it comes to this one issue.

When Larry Merchant, in the last televised bout of a 35-year career full of buying into fake narratives and press release propaganda, proclaims that Donaire has “inoculated himself” from suspicion of PEDs use, we have to assume that Merchant is either really simple-minded or willfully ignorant. I assume the latter.

None of this is Donaire’s fault. He just fights and, like most fighters, is looking to make the most money in the easiest way possible.

The sad thing is that the kid is good enough to become a star without all the infomercial posturing and Hollywood side stories. He’s a truly talented fighter and could reach the same heights of stardom by ditching the sales routine and simply giving the fans great fights against the best opposition.

Fights with Abner Mares and Guillermo Rigondeaux could do much more for his legacy than some sideshow press release material.