There is no greater blight upon the scribe’s landscape than the phrase “…Writers’ Association of America.” Boxing’s corrupt fraternity of gladhanding media whores has been very well-documented on this site; our Fearless Leader leads by example on that front. I don’t know the football and basketball front well enough, but I do know that boxing and baseball between them have done enough to tarnish the “WAA” that 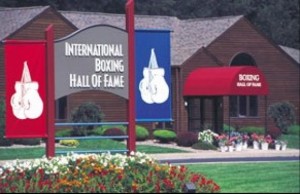 the NFL writers could be a band of scribes worthy of Runyon, Rice, and Deford and they’d still not polish all the tarnish off the idea of a professional association for unprofessional people that the acronym has come to imply.

I thought of this as the Twitterverse and Facebook and indeed SportsCenter blew up this week over the snub en masse by the Baseball Hall of Fame voters of everyone from Barry Bonds to Craig Biggio to Roger Clemens, a combination of steroid cheats and guys about whom the writers said “he’s a Hall of Famer, but he’s not a first-ballot Hall of Famer” (Tim Kurkjian of ESPN says this is why Biggio didn’t get in. Seriously.) What if you threw a Hall of Fame induction and nobody came? The Hall is going to “celebrate history” with tributes to the likes of Rogers Hornsby, further cementing the idea that baseball is as dead as boxing, it just had a higher perch to fall from and a longer, slower decline.

Contrast Canastota with Cooperstown. Hell, contrast boxing’s history geeks with baseball’s. Baseball has confirmed assholes like Ken Burns and Keith Olbermann crowing about the supposed “purity of the game” in terms that a Republican politician wouldn’t have the cheek to pull in any district where the people in aggregate are darker than Ron Howard (shut up about Jackie Robinson. Most “baseball historians” treat Robinson the way South Park treats their black character Token.) Boxing? Boxing has the kinds of affable old dudes like Bert Sugar who always earn their slice of pumpkin pie when you invite them over for Thanksgiving dinner. Bert Sugar was likable. If you listened to him talk, the main takeaway you’d get was “Wow, dude loves his fights, and whatever you think about the past, he can sure wax nostalgic about Sugar Ray Robinson.”

This joie de vivre is part of why the Boxing Hall of Fame gets it. Arturo Gatti was voted in this year with a minimum of puling and fuss from his detractors. He was not a great champion, whatever that means exactly. Mike Tyson was, if we’re applying Great Big Ideas to the discussion, not a great champion either—he was, in baseball terms, a guy who hit 55 home runs for four straight years then put up .260/.330/.425 seasons with 20 homers for a decade to end up falling short of 500 home runs for his career, not a guy the baseball writers would even consider putting into the Hall. Boxing writers, who actually saw Mike Tyson fight, knew better, and put him in the Hall on the first ballot because holy shit did you SEE the Michael Spinks fight?

Micky Ward has been seriously discussed, and not just by your blatantly New England homerish columnist, as a Hall of Famer, and we’ll probably see Naseem Hamed, Zab Judah, and other entertaining if not great fighters in Canastota before all is said and done. The apotheosis of the idea that a Hall of Fame is supposed to be about, y’know, fame? Sylvester Stallone has been honored, and not as a sideshow—the man has been honored in the same category and with the same honors as guys like Al Bernstein and Larry Merchant, “for contributions to the sport of boxing”. Is Kevin Costner ever going to be a full member of the Baseball Hall of Fame?

You can take a trip to upstate New York in search of sports history. Hell, you can drive from Springfield, MA to Canton, OH, detouring into Canada for a quick trip to Toronto (and Tim Horton’s donuts, because Timbits), and you’ll have passed through the museums of all four “major” sports (basketball in Springfield, baseball in Cooperstown, hockey in Toronto, and pro football in Canton) and one once-great sport in Canastota. Four of those Halls of Fame are appropriate shrines and suitably reverential to the sports they commemorate, to the point where if you have a friend from outside the country (US or Canada) who wants to learn about everything there is to know about America’s (and Canada’s) sporting loves, they will come out of those Halls with the contextual tools to understand and enjoy what could become their new favorite sport.

Try that in Cooperstown and you’re liable to come away with the idea that nobody has played the game since 1994, since when you look at the vote totals for guys like Bonds, Clemens, McGwire, and Sosa, none of whom have a realistic chance of ever getting in under the current voting regime, it quickly becomes evident that baseball is a sport for sanctimonious sentimentalists, not sportsmen or gentlemen or any of the real 19th-century virtues that baseball purists always piss and moan about keeping alive.

As if all of the above weren’t bad enough, as if I hadn’t just burned 800 words suitably pushing home the point about how screwed up baseball is? Consider this. With one miserable, stupid announcement yesterday, someone actually managed to push the word “Boxing” from the list of worst words to be followed by “Writers’ Association of America.” Congratulations, baseball writers. You just knocked out the champ in one round. That is one hell of an accomplishment.

Fox Doucette covers Friday Night Fights for The Boxing Tribune. His weekly column, The Southpaw, appears on Thursdays. He’ll get into the Boxing Writers’ Association of America around the same time he wins a Pulitzer and the Nobel Prize for Literature in the same year. Fan mail, hate mail, and a letter-writing campaign to the Nobel committee can be sent to beatcap@gmail.com.