Bernard Hopkins is a former undisputed middleweight champion and a two-time light heavyweight titlist. In 2011, “The Executioner” became the oldest boxer to become a world titlist when, at 47 years of age, he beat Jean Pascal for the WBC light heavyweight title. One of the most accomplished fighters of this era, the Philadelphia native is a guaranteed first-ballot hall of famer. On January 15, 2013, Hopkins turns 48. 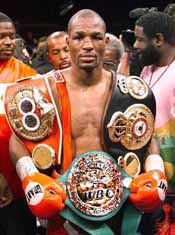