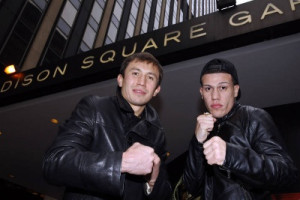 Golovkin, who now lives in Germany, has been the talk of the boxing underground for several years and has garnered serious mainstream hype in the last year.  The buzz is for good reason.  Golovkin has serious skills and more serious power.

He was a top notch amateur with wins over the likes of Andre Dirrell and Lucian Bute.  As a pro he has demolished nearly everyone put in front of him, knocking out twenty-one of twenty-four, including the last eleven he has faced.  His most noteworthy wins include a one punch KO of Lajuan Simon, a tenth round stoppage of former champ Kassim Ouma, and a highly impressive beating of tough Grzegorz Proksa in his HBO debut in September of last year.  In that most recent encounter, Golovkin dropped Proksa four times despite the fact Proksa had never been knocked down before en route to a fifth round stoppage.  More importantly, Golovkin simply looked like a world beater.  One of those rare specimens that is just beyond normal strength with knockout power in either hand that can come at any time.

Meanwhile, over the last year, one division south, Gabriel Rosado was drawing attention as well.  Rosado doesn’t have the pedigree of Golovkin, getting into boxing late at eighteen years of age.  After a short amateur stint, Rosado turned pro and learned on the job.  A year ago he was hardly a thought on the national scene.  He was 18-5, struggling to get noticed, and more importantly struggling to find his ring identity.

Now, one year later, it is a different world in every way.  Rosado fought three times this year stopping all three opponents in impressive fashion.  Rosado ran over the durable Jesus Soto-Karass in five, broke down the crafty Sechew Powell in nine, and wore out Charles Whitaker in ten.  All three fights were on NBC Sports, getting Rosado needed exposure.

The biggest accomplishment was finding his ring identity.  Gone was the fighter who warped between flashy, cautious, and a myriad of other styles.  Suddenly, Rosado was a come forward intelligent pressure fighter looking to hurt and stop his opponents.  Rosado and trainer Billy Briscoe have built a fighter with a slick defense that involves head movement, slipping punches while charging in behind the jab to set knockout hooks and uppercuts from either hand.

The three fight surge made Rosado the number one contender to Cornelius Bundrage for his 154lb title.  So with all that going for him at 154, why in the world would he choose to move up a division to take on a far tougher challenge in Golovkin?  And, is this a fighter who has enough ring intelligence to see something no one else sees in his opponent Saturday or is he simply another contender that will get shown the canvas against a top puncher and fighter?

There does exist some upsides for Rosado in this fight.  While he was the number one contender to Bundrage that hardly meant much.  Bundrage has fought less than once a year the last several years and was showing no urgency to handle the mandatory Rosado.  In addition that was at junior middleweight, hardly the attention and history of middleweight.  If Rosado were to pull the upset he suddenly could find himself with a middleweight title and have his name mentioned for far bigger fights in the storied 160 division against the likes of Sergio Martinez or Julio Cesar Chavez Jr.

Still, the elephant in the room remains. Even with his surge and impressive performances in 2012 he will be a heavy underdog to Golovkin for good reason.  As stated above Golovkin is a monster not to be taken lightly.  In talking with Rosado after the fight was signed it was clear he knew what he was getting into, giving Golovkin all the credit in the world and he recognized he has to be wary of his power.  However, Rosado believes he has the experience and talent to take the phenom down.  Rosado believes he has fought tougher competition, is more battle tested, and that his style will win out over Golovkin and lead to the upset.

Rosado’s guts and spirit cannot be questioned.  In an age when many fighters would gladly sit out of action to wait for their mandatory, Rosado is moving up to take a tougher challenge instead of waiting to make his mark.  Not being content to wait, he figures no risk, no reward, so make the move and take on a big test.  Toss in the fact that this fight was originally contracted at 158lbs to compensate Rosado moving up, but it was Gabe who told the promoters no catch weight.  Rosado gave up the catch weight, stating he wants to win the middleweight title at the true middleweight limit of 160lbs and wants no excuses when he wins.

The fight should tell a lot about both fighters.  The world wants to know if Golovkin is really the phenom he has been made out to be on YouTube and boxing chat rooms.  If he can roll over Rosado he may be the real deal as Rosado has shown to be a real contender and he has every bit the Philly toughness and heart that won’t go away lightly.  Meanwhile, the Philly faithful along with more and more mainstream fans want to know if Rosado is for real.  Can an upstart late comer to boxing have really developed into a title holder or will he fall short against the big guns?  Will he pull off what would almost certainly be the upset of the year or will he be blasted by the punching phenom?  Saturday we find out.