There was quite a lot of action last night, so this week I’m dispensing with the usual formalities, introductions and clever quips and we’ll jump straight into the fray. I gave you your instructions in the dressing room, what I say you must obey, cuidate, eschua me, toca los manos y buena suerte. Come out fighting at the bell!

You know, I really wanted to root for Gabriel Campillo. He is, after all, from Madrid Spain like much of my family.

I thought he was absolutely robbed versus Tavoris Cloud. If you’ll remember for a moment, Cloud had Campillo down twice in the first but the Spaniard bounced back beautifully, giving the Florida native a boxing lesson down the stretch. I believe the unofficial score cards had Gabriel winning nearly every round aside from the first and the sixth.

That being said, I do believe that that night in Corpus Christi nearly one year ago was the culmination of everything Gabriel had as a boxer and indeed it was his finest hour, even in split decision defeat (thanks, Don King). I learned a few things, too, believe it or not. As highly as I think of Tavoris Cloud, he doesn’t yet know how to effectively fight a rangy southpaw. Secondly, if Cloud wants to take his game to the next level he should hire the services of Miss Anne Wolfe. I think they would make an excellent team. I also feel that Tavoris’ upcoming bout with the immortal Bernard Hopkins will be the last we see of the Executioner inside of the squared circle as a professional fighter. “Thunder” Cloud will have too much fire power for the conventional, cagey old vet, I can’t see B-Hop’s tricks taking him to the final bell.

Now that you’re all caught up with my thoughts on a fight from last year, let’s talk about what happened last night.

First we’ll go to Connecticut where live from the Mohegan Sun Casino the undefeated Russian, Sergey Kovalev punished the 34 year old Campillo over three one-sided rounds. Gabriel looked very much like a fighter with no legs, quite the opposite from what we saw in his fight with Cloud.

For the first two rounds, Kovalev was simply administering a mild beat-down to the Spaniard but in round number three a wicked left hook set up a series of punishing shots to both the head and body, sending the visiting former champion to the mat three times before referee Mike Ortega mercifully intervened and saved Campillo from further brutalization.

The light heavyweight division definitely has a new killer in its mists. How about putting Kovalev in with Cloud after he dispenses with ‘Nard? Just a thought.

I enjoy Freddie Roach as a commentator, he and BJ Flores are competent announcers and I always appreciate their insight. Pound for pound, though, Paulie Malignaggi is still one of the best broadcasters at the moment for my pesos. The unbeaten super middleweight S.O.G. Andre Ward was along side Bob Papa last night from M.S.G. in N.Y.C. on HBO. You can file his time on the mic under F for very fucking forgettable.

Also very forgettable was Deontay Wilder’s fight last night from Villahermosa, Tabasco, Mexico. You didn’t know? The Bronze Bomber added yet another knockout win to his ledger bring his total up to 27 with all of his wins coming by stoppage. Of course, beating up on the 98th best heavyweight in the world won’t win him any new fans, I still like Deontay’s chances against either Klitchko. Anyway.

If the very new rumors (courtesy of ESPN’s Dan Rafael) of Yuriorkis Gamboa and Timmy Bradley are true, I have to go with Gamboa all day (unless it goes to the cards, in that case I envision another Bradley/Pacquiao scenario). Gamboa is one of the most athletically gifted active fighters right now, he may have looked a bit rusty in his last outing against Michael Farenas (because he was) but that doesn’t diminish his gifts in my eyes. A focused and properly prepared Yuri will out-class almost anyone.

Back to Madison Square Garden, though. Mikey Garcia introduced himself to the world with a textbook beat-down of former champion Orlando Salido. The veteran Salido had little to offer the young beast from Oxnard other than the occasional wild haymaker. Garcia was too composed, too intelligent and much too heavy handed for “Siri” (no, not you iPad…Shhh, I already know where the best Mexican restaurant is). 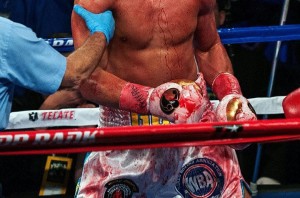 do nothing but go up with this defeat) last night on the same card. “Double S” Steve Smoger was the referee for the “Triple G” fight (are there enough alliterations and acronyms for you this week?).

“GGG” is an interesting fighter to me. He doesn’t do anything particularly amazing, he’s not the fastest nor the most technically sound guy out there, but his accuracy combined with his naturally dense bone structure make him a pressure fighter like few others. Golovkin has a huge amateur background so his experience alone makes him very dangerous. Max Kellerman thinks he’s a “middleweight Mike Tyson” (I can’t quite sign off on that one, Max), I do, however, see big things for the 30 year old Kazakhstani.

That brings us to the end of another Sunday Brunch. I hope you had your fill for today…Remember to brush your teeth and always floss. (I didn’t even mention Floyd Mayweather’s name once) Have a great week and stay tuned to The Boxing Tribune for your boxing fix, you wonderful, wonderful addicts.