Who says ESPN has no big fights? Take a former world champion in Serhiy Dzinziruk (37-1-1, 24 KOs) trying to put his career back together and throw him in against a live underdog in Brian Vera (21-6, 12 KOs) and you’ve got yourself one hell of a main event. In the co-feature, unbeaten Tony Luis (15-0, 7 KOs) gets a short-notice slappy in Jose Hernandez (13-6-1, 5 KOs) to beat up on national television, an 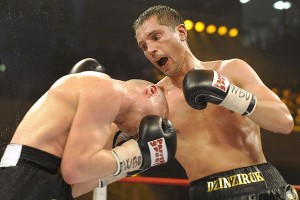 unmistakable step down from original opponent Miguel Gonzalez (who took Mike Dallas Jr. the distance in a losing effort on the Worldwide Leader.)

Serhiy Dzinziruk is either proof that the WBO will give a belt to anyone or else he’s an underrated junior middleweight who has fallen on hard times. On the one hand, he won his first 37 pro fights, somehow holding a world title for five entire years (2005-10) without ever beating even so much as a fringe contender at his weight. Dzinziruk beat the likes of Sebastian Lujan, Lukas Konecny, Joel Julio, and Daniel Dawson, went two years without defending his title (the time between those last two mentioned opponents), and as soon as he fought a guy with a pulse, got his ass kicked by Sergio Martinez.

As if that weren’t bad enough, remember Jonathan Gonzalez, the guy who looked like an embarrassment against Derek Ennis on FNF just two weeks ago? Fought Dzinziruk to a draw. If Serhiy Dzinziruk were even a top twenty-caliber fighter, he should’ve beaten the snot out of a punk like Jonathan Gonzalez, whom Teddy Atlas acknowledged wasn’t even at his best in that fight (showing no regard, for example, for the idea of a weigh-in.) When is 37-0 a puffed-up farce of a record? When 0-1-1 is a hideous exposure of a guy who is turning 37 in five weeks without ever having won a marquee fight, that’s when.

Brian Vera is a wild card among wild cards. On the one hand, he has twice smacked around Sergio Mora. On the other hand…he has twice smacked around Sergio Mora, who is not exactly Floyd Mayweather in there. Every time Brian Vera has fought a genuine contender, he has gotten his ass kicked. Most notably, James Kirkland beat Vera so senseless that it is a wonder that Vera’s career did not end up with a toe tag and a coroner’s report after that eight-round demolition in 2008. It was the first of what would be three straight losses in which Brian Vera went over two years without a victory.

Since winning his first 14 pro fights, Brian Vera is 7-6. On paper, Serhiy Dzinziruk will beat the ever-loving crap out of him. But, to paraphrase ESPN’s Kenny Mayne, boxing matches are not fought on paper. They are fought inside television sets. Nobody (least of all your columnist) thought Vera would beat Sergio Mora either.

In the co-feature, as mentioned at the top of the article, Tony Luis has lucked into a short-notice banana slug to step on and make gooey. Miguel Gonzalez would’ve given the unbeaten but still untested Luis to a proper proving on national television. Jose Hernandez is going to fall down like a good soldier…if he doesn’t remain upright as damning testament toward what appears to be a frightful lack of power on the part of the Canadian prospect.

Jose Hernandez has only been knocked out once. By the standards of a Tony Luis opponent, Jose Hernandez is Hector Camacho…Senior. By the standards of a Tony Luis opponent, this is trying to knock the chin off of the stone presidents in South Dakota. The true test of Teddy Atlas’ maxim “is it power or is it opposition?” will be tested Friday night, with results that suggest that swing fights will have to wait until after the main event if they are to happen at all. Plan for ten rounds and maybe order a pizza. For carryout. Your columnist watches low-action power failures so you don’t have to.

Friday Night Fights airs on ESPN2 and the WatchESPN app on Friday, January 25, at 9 PM Eastern/6 PM Pacific. The Boxing Tribune will have a full recap of the night’s televised action, including any swing fights that make air, shortly following the conclusion of the broadcast. Stay tuned; we’re the worldwide leader in covering the Worldwide Leader.

Fox Doucette covers Friday Night Fights for The Boxing Tribune. His weekly column, The Southpaw, appears on Thursdays. Fan mail, hate mail, and scarecrows for Tony Luis to fight can be sent to beatcap@gmail.com.