Here we go again. Demetrius Andrade (18-0, 13 KOs) must need money again, because he’s fighting a guy with a pulse. The heartbeat-possessing hominid in question is Freddy Hernandez (30-3, 20 KOs), who to his credit has fought for a world title, even if that fight resulted in Andre Berto beating the living crap out of him for a grand total of two minutes and seven seconds. Hernandez also took Erislandy Lara the distance in his last fight (and if judge David Denkin is to be 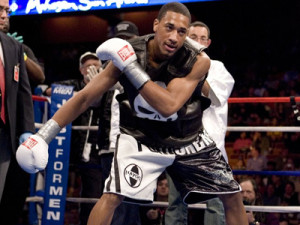 believed, nearly did enough to take a draw. Do not believe David Denkin.) Considering that Grady Brewer made a deal with the Devil to beat Fernando Guerrero then had the Devil come around to collect in the Andrade fight, this is without question the biggest test of the young career of Demetrius Andrade.

It might even be praiseworthy, if it weren’t for the fact that Andrade is thumping his chest like he’s a world champion whenever he gets in front of a reporter’s microphone. Freddy Hernandez, as good as he is, is nonetheless rated at No. 32 in Boxrec’s chess-like rankings and does not appear in the top 15 of any of the alphabet soup organizations (H/T Fightnews for sparing your columnist the indignity of trying to navigate the wretched websites of the major sanctioning bodies; the WBC’s rankings in particular seem to be actively hidden from the public.)

Speaking of Andrade, can I have a night with the hooker he sent to IBF world headquarters to get his No. 3 ranking in that organization’s hierarchy? With the No. 1 and No. 2 rankings “vacant” (gods bless ’em, the IBF sure loves their eliminator bouts), the IBF seriously believes that Demetrius Andrade is the second-best 154-pound fighter (after Cornelius Bundrage) available. You could almost forgive the WBO (let’s face it, the WBO is a “major” organization mainly because the boys in Canastota and the BWAA have decided they are; their championship lineages do not inspire confidence.)
This is what grinds my gears about Demetrius Andrade. I’d be willing to forgive a guy who raced up the rankings because he scored a series of spectacular knockouts over middling, fringe-contender competition on national television. Ruslan Provodnikov is ranked at No. 2 by the WBO (see my point about those guys?) at junior welterweight, behind only Brandon Rios and champion Juan Manuel Marquez. Fightnews has Marcos Maidana second behind Timothy Bradley (?) in their own internal rankings structure. I will happily allow anyone on earth to overrate an action-oriented pressure fighter, because that means more action-oriented pressure fighters fighting on television and making shitloads of money and more “Last Night’s Winner: Boxing Fans” columns from your favorite bloodlusted boxing writer.

Demetrius Andrade and his “jab, jab, jabjab, jabjabjab” style is about as much fun to watch as a dramatic reading of the phone book by Ben Stein. When our esteemed editor sent out the bout list in the writers’ email this week, I actually checked Boxrec to make sure Andrade wasn’t a late replacement on Friday Night Fights, meaning I’d have to watch him. Seeing that the fights would be on Showtime (and therefore I’d be safely sequestered on my normal beat watching Serhiy Dzinziruk and Brian Vera) warmed my soul. If the boys on premium cable want to spend their money to learn what ESPN already knows—that “Boo Boo” is neither marketable nor entertaining—then they can be my guest.

It takes a lot to get your columnist into the hater column. Nebraska and Notre Dame football are on my permanent shit list for their administrations’ cavalier attitude toward players raping women on campus. I’ll never let my sons play lacrosse because my father would turn in his grave to consider that his grandchildren turned into lax bros. Penn State can go fuck itself with a running rusty chainsaw for the handling of the Jerry Sandusky incident. I cheered loudly and ecstatically when Juan Manuel Marquez clobbered Manny Pacquiao and singlehandedly saved the sport of boxing from Dennis Guillermo.

Demetrius Andrade has crossed that moral event horizon. He has a boring style, fights hobos to pad his knockout count, sits in the corner telling daddy to tell him how great he is when he can’t get rid of an 8-8 journeyman (Geoffrey Spruiell, name the time and the place and I’ll buy you a beer.) His promoter raised a stink in the comments section when I called out the Andrade-Rudy Cisneros fight as the pathetic farce and waste of time that it was. I’m glad Boo Boo’s promoted by Joe DeGuardia’s Star Boxing, because if he were promoted by Jimmy Burchfield, I might actually feel bad about riling up the promotional outfit (Burchfield promotes Hank Lundy, one of my favorite fighters, which in my book puts him on the right side of the ledger as boxing guys go.)

Since this is my weekly opinion column and not a fight preview, I get to dispense with professionalism. Freed of that constraint, I say this: Freddy Hernandez, I hope you slip one of Andrade’s occasionally lazy jabs, get inside on him, and do to him what Micky Ward did to Alfonso Sanchez. Dig that hook into the body like you’re tunneling to China. Because I’ve been writing about Demetrius Andrade for two years now, and I’m running out of ways to work this goddamn angle. Knock him out.

Fox Doucette covers Friday Night Fights for The Boxing Tribune. His weekly column, The Southpaw, appears on Thursdays. Fan mail, hate mail, and a fresh case of Haterade can be sent to beatcap@gmail.com.