Ready for more washed-up fighters getting pushed by ESPN2 for name recognition on Friday Night Fights? In the immortal words of Three Dog, “Me neither. But it’s that time again.” Welterweight Nate Campbell (36-9-1, 26 KOs), who turns 41 in four weeks, travels to the unfriendly confines of the Bell Centre in Montreal to take on undefeated GYM Promotions house fighter Kevin Bizier (19-0, 13 KOs), who appears to be getting set for a David Lemieux-like debutante’s ball on American television. In the co-feature, featherweight Tyler Asselstine (12-0, 7 KOs) gets an undefeated 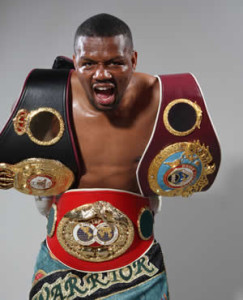 Kevin Bizier has made his name in Canada fighting on GYM’s undercards, polishing his skills and polishing off opponents in a manner that has become very familiar for Montreal prospects coming up through Yvon Michel’s slappy brigade in order to get their names out there and fans interested in seeing more. Bizier is 28, and he has begun to enter the “OK, do something” phase of his career; Friday’s main event is expected to be that stepping stone. Bizier is following in the footsteps of guys like Adonis Stevenson, David Lemieux, and the rest of the puffed-up record Montreal dudes foisted on an unsuspecting public.

Surprisingly, the IBF isn’t involved this time; this main event will be for the NABA minor belt at welterweight, which is part of the WBA’s collection of brass trinkets and curios rather than being part of Michel’s usual cuddle buddies in Springfield, New Jersey.

Standing in Bizier’s way will be a guy who last held a major world title three years ago, when Nate Campbell beat Ali Funeka to defend the unified lightweight championship of the world. Campbell fought Timothy Bradley a year later in a grab for Bradley’s WBO junior welterweight crown, but got smacked around for three rounds and cut over his left eye en route to a no-contest. Four losses in his next five fights followed, effectively finishing Campbell as a serious force in the sport. Two wins in 2012 against Victor Cayo and Krzysztof Stot have set Campbell up to make an argument for his reclaimed greatness, but he is still almost 41 years old at a weight level far below that at which fighters usually fight well at advanced ages. Juan Manuel Marquez is 39, but he is also Juan Manuel Marquez. Nate Campbell is not Juan Manuel Marquez.

Still, this main event smacks of Andrzej Fonfara-Glen Johnson from last year or the two embarrassments we saw last week on the Worldwide Leader from Jose Luis Castillo and Cory Spinks. The smart money’s on the young prospect getting the job done in the friendly confines against the old man. If Bizier does not knock Campbell out, he will undoubtedly be given every possible benefit of the doubt on the scorecards in a venue that is absolutely infamous for home cooking for the two major promotional houses that operate from there (GYM, which is putting on this fight, and Interbox, promoter of Lucian Bute.)

Can Nate Campbell win the fight? Sure, he can. The question is not one of who has the greater overall on-paper ability independent of age. The question is how much Nate Campbell has left in his tank. If your columnist is wrong, words will be eaten in the recap. Still, Campbell is stepping to the plate with an 0-2 count and the pitcher shining a police flashlight in his eyes.

The co-feature is better than one usually expects from a short-notice opponent. Tyler Asselstine knew he’d be fighting on this undercard. Baha Laham got talked into risking an undefeated record against a fellow house fighter. Laham has beaten a stack of nobodies and owns a draw against an 8-6 fighter (Leonus Marie Francoise, in an FNF swing fight last April). It’s clear that his handlers probably twisted his arm on this one, because Asselstine’s so far shown a lot more in his quest as a prospect, even picking up a first-round TKO across the pond in Yorkshire in his last fight, disposing of 8-3 Sandor Horvath in only 84 seconds.

The fighters look well-matched, both have shown flashes of power, and until one of them gets his chin seriously tested, there’s not much between them. Asselstine may be the favorite mainly thanks to, if nothing else, having a full training camp for a fight date, but whenever “someone’s O must go”, the power factor’s harder to predict reliably. Neither man has been on the floor, but Asselstine does own a unanimous decision win over the aforementioned Francoise, who drew with Laham.

Friday Night Fights airs on ESPN2 at 9 PM Eastern/6 Pacific. The Boxing Tribune will have a full recap of the night’s televised action, including any swing fights that make air, following the conclusion of the broadcast. Stay tuned—we’re the worldwide leader in covering the Worldwide Leader.

Fox Doucette covers Friday Night Fights for The Boxing Tribune. His weekly column, The Southpaw, appears on Thursdays. Fan mail, hate mail, and the argument for Nate Campbell can be sent to beatcap@gmail.com.