Hello friends and welcome to another action packed, information crammed edition of your Sunday Brunch. This week we talk about performance enhancing drugs and who may or may not be using them (lookin’ at you, Armstrong), Adrian Broner’s performance against someone he could literally look down on and Floyd Mayweather’s upcoming decision. With that, I gave you your instructions in the dressing room; what I say you must obey. Cuidate, escucha me, toca los manos y buena suerte…Let’s get it on! 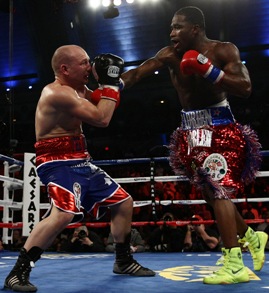 Last night from the Boardwalk Hall in Atlantic City, New Jersey, Adrian “The Problem” Broner proved to be much too much for the diminutive yet game Welsh slugger and former Prize Fighter victor, Gavin Rees. The Vegas betting lines listed the Cincinnati fighter as a -3300 favorite to smash the man from the British Isles, however, Rees (and further back, Daniel Ponce de Leon) showed us that Broner indeed has some work to be done yet before the Mayweather comparisons are to be validated.

Yes, he did win well inside of the distance (as was expected by nearly everyone on the planet) but did he look like the heir apparent to the pound for pound throne? That I’m not so sure about…Not yet, anyway. If we’re comparing apples to apples, Floyd (even at such an juvenile stage in his career) would have not had the problems that the Problem had with his out-gunned and out-sized adversary.

Yes, Adrian is only 23 years of age and he did show us that he likes to fight, but the man from the land of the Welsh Dragon landed with a frequency that most did not expect, especially with all of his apparent disadvantages.

What I think: Adrian is bit too brash for his own good at this very early stage of his career. Yes he gets the job done nicely, but the pound for pound comparisons should be put back on the burner for a few more years before resurfacing. The man is a complete fighter, that I will say…And in today’s boxing landscape, that is becoming increasingly rare.

As my esteemed colleague Tim Harrison so succinctly put it in his Monday Rant  Floyd Mayweather is indeed a master of manipulating the mass media for his own ends. In Floyd’s own words, he is his own boss and makes moves when he wants to make them. So the tweet regarding IBF belt warmer Devin Alexander as the potential front-runner came as no surprise to me when I read it. As I’ve said before, it could easily be a smoke screen to what is really happening behind the scenes, at it were (but if you saw how freakishly huge Alexander’s bicep is, it’s no wonder that thing got injured, if it did at all…It was almost as large as his cranium).

While Robert Guerrero has been suspiciously quiet these past few weeks, he was at one time the undisputed king of getting face time with every and all reporters who would speak with him regarding how “deserved” he is at a mega-money show down with Money Mayweather. Apparently beating (and thumbing Berto’s two eyes) is enough for a multi-million dollar pay check opposite the sport’s best athlete.

What I think: We could very well be seeing a Floyd/Robert clash come May the 4th. We could just as easily see a Mayweather/Alexander scrap as well. In my estimation it doesn’t matter who Money fights. All work is easy for the premier athlete in the game today.

By now most of you have heard that former Olympian Yuriorkis Gamboa was linked to a Miami, Florida anti-aging clinic who was recently exposed for providing high-profile athletes with performance enhancing drugs – Gamboa’s name was on the list, along with notes about how he needed a specific time frame to clean out his system because of the fight he had coming up at the time (with Rios) which was eventually scrapped. The irony here is Gamboa is a decorated amateur and Olympian and never once failed a drug test, yet the speculations are still rampant.

What I think: I can think of another highly decorated athlete who never failed a drug test and his fans get belligerent when you bring up the P.E.D. talk…Starts with an “M” and ends with “acquiao”…That’s all I have to say on that subject.

Speaking of the recently decapitated Filipino, word has it that his reported trip to Israel was in fact a trip to China to see a specialist about his jaw which, according to sources was badly damaged in his knockout loss to Juan Manuel Marquez late last year.

Saul “Canelo” Alvarez announced to the world on his personal Twitter page that he will indeed be facing Cotto conqueror Austin “No Doubt” Trout on May 4th from Las Vegas, Nevada. I guess they resolved his “I get Floyd win or lose” babble.
What I think: In the event that Canelo loses to No Doubt Trout, I highly doubt that Floyd Mayweather will ever square off against the New Mexican. A bout versus a once beaten Alvarez will do much, much bigger numbers and as they always say “If it don’t make dollars it don’t make sense”.

And with that we will wrap up another edition of your Sunday Brunch. I hope you’ve had your fill for today and enjoyed reading my random insights and miscellaneous thoughts. Remember to brush your teeth, rinse and gargle. May the force be with you and for God’s sake, watch out for fucking asteroids! Ciao, friends…Stay hungry. Another Sunday Brunch is forthcoming.