There were many good fights on this weekend, some upsets, a lot of rumors and even more bullshit mongering; let’s skip the formalities and introductions to your Sunday Brunch this week and hop right into the Fray.

Floyd Mayweather finally announced that he will indeed be facing Robert “The Ghost” Guerrero on May 4 as was widely speculated. The “Money” man also inked a ridiculous multi-multi million dollar deal with Showtime for “up to six pay-per-views” over a 30 month period.

What that means exactly is that Floyd will likely have the option to retire after one fight if he so chooses, or he can go through with all six fights in a little over two years; that’s much more activity than he’s seen in quite some time. In fact, Mayweather is coming off of a lengthy layoff after his victory over Miguel Cotto last May. According to the former Pretty Boy, “Jail was a minor setback for a major come back”.

This move is great for the sport of boxing as Mayweather has fans split right down the middle regarding their love or hate for him. One thing is for certain, though, the man is the best in the business and we’ll be seeing a lot more of him win, lose or draw.

Mayweather was not only ringside for Saturday’s Showtime card featuring a few of his TMT fighters, he was actually working their corners. A move I didn’t expect but it was interesting none the less. I’m not sure that Mayweather Jr. will be the same level of trainer that his father and uncle are/were but for whatever it is worth he seems to inspire confidence in his guys; both J’Leon Love and Ishe Smith registered victories.

On Friday Night Fights on ESPN we saw the return of Lamont Peterson as he battered “Rated R” Kendall Holt into submission and forced a referee stoppage in the 8th round of an absolute beat down. Good stuff from the Washington D.C. native.

I couldn’t help but notice how fat Dan Rafael has gotten lately. I know he was always quite rotund, but I think it’s gotten out of hand now. All of those free buffets are catching up to him, big time…His suit on FNF looked like it could double as a sectional couch cover is all I’m saying.

Who saw Tony “The Tiger” Thompson knock out UK’s David Price? Perhaps the loss will help Price to focus and become a better fighter in his quest to win a world title. Thompson is a big guy with a good punch, he caught the Britt on the temple and that was all she wrote. Seems funny now that days before the fight The Tiger was quoted saying that he thinks fighters should be allowed to use PEDs… 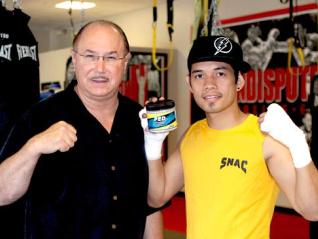 Nonito Donaire is publicly blasting Guillermo Rigondeaux again on his personal Facebook page, this time about his supposed non-completion of the VADA (Voluntary Anti-Doping Agency) application forms. According to various sources, Rigondeaux left no address or telephone number for the agency to reach him for testing.

Gary Hyde, who is Guillermo Rigondeaux’s manager was reported to have contacted Bob Arum and clarified with him that they didn’t know the address of the gym they’re going to be training at in Orlando nor did they have the hotel’s address where they will be staying during camp – He said he would fill that information in as soon as it was made available to him.

Donaire’s wife, Rachel (who I think might be this “Admin” character on Nonito’s Facebook page…A lot of the posts they make are often stated from a rumor mill type of stand-point and are often deleted after facts are pointed out by some of his followers) has even gone to mainstream boxing websites saying things like (paraphrased) it’s suspicious that Guillermo (a Cuban) wants his contract in Spanish…Really suspicious.

Things would be a lot less complicated if Nonito Donaire wasn’t aligned with a convicted P.E.D. dealer in Victor Conte, who has gone on record denouncing USADA’s (United States Anti-Doping Association) testing protocol – Saying things such as the Congress approved testing body doesn’t use important carbon isotope ratio (CIR) tests on every sample.

The USADA fired back saying that Conte’s claims were bogus and states that they’ve been using that particular type of testing since the early 2000s. They went on to disprove the false claims in an article on ESPN saying “USADA also collects longitudinal data that allows us to monitor any fluctuations in an athlete’s own biological parameters and closely examine any changes or indicators…” The Boxing Tribune’s own fearless leader breaks down the Conte/VADA connection here.

Guillermo Rigondeaux may or may not be the man to stop the ascent of Nonito Donaire as the Phillipine’s next top role model but one thing is for certian, I think it’s safe to say the Cuban defector has had his share of Olympic drug testing.

The WBA World super bantamweight champion is a two-time Olympic gold medal winner and claimed over 14 championships in both national and world competitions. His amateur record was an astonishing 400 victories with only 12 defeats.

If Nonito Donaire used an agency with world level experience like USADA or WADA (World Anti-Doping Agency) he would have had no problems getting Rigondeaux to agree to Olympic testing (not Olympic-style testing – That’s like barbecue-style sauce, or Chinese-style food – You want the real deal Holyfield, trust me on this one).

The fact is the really suspicious thing here is that Victor Conte is allowed to work with athletes still, and since Nonito has given himself over to the former BALCO mastermind and will only use VADA for testing things seem more suspect from the opposite side of the equation.

My advice to the Filipino Flash would be to get off Facebook and get your ass in the gym. I’m sure Rigondeaux isn’t crying to his fans about anything. He’ll be getting up for the biggest fight of his young professional career that you can bet on.