This one has been in the making since the Fall of last year, but scheduling conflicts and a Bogere shoulder injury have kept this championship clash from happening until now. 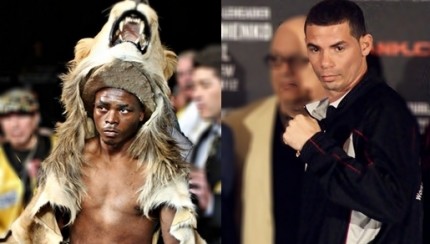 On the surface, Abril-Bogere seems a star-and-a-half shy of being a five-star showdown and a full step below what would normally be considered a world class title bout. But these days the lightweight division is paper-thin. The three best fighters at 135– Adrien Broner, Ricky Burns, and Miguel Vazquez– already have world titles and, below that, most of the challengers are damaged goods retreads and/or basic cable mid-carders.

So, while Saturday’s WBA title bout may not be a stellar showdown, it certainly should garner its share of attention for being an interesting stylistic match-up.

30-year-old Cuban national, Abril, has faced the better opposition of the two with a win over former champ, Miguel Acosta and close split decision losses to Henry Lundy and Breidis Prescott on his resume as well as a horrendous screw-job loss to Brandon Rios for the WBA lightweight title in April of last year.

Against Rios, Abril’s Cinderella story would fall apart after twelve solid rounds of tying up, frustrating, and otherwise spoiling a shockingly clueless and befuddled “Bam Bam.” Expecting to hear his name announced as the victor, Abril, along with most observers, was stunned to see Rios’ hand raised as the split decision winner with judges Jerry Roth and Glen Trowbridge canceling out Adalaide Byrd’s call for Abril.

It was a heart-breaking loss for Abril, only slightly mitigated by the title remaining vacant due to Rios’ inability to make weight. WBA edict arranged for Abril to keep his divisional ranking and challenge the highest-ranked available opponent for the vacant strap.

The tall, lanky Abril may have hit his stride as a full-time spoiler with long, octopus-like arms, an awkward style, and an eye for stifling just as much as striking. Despite a fairly weak knockout ratio, Abril has a decent punch when not completely out of position to actually throw something meaningful.

Uganda’s Bogere, he of the lion cage entrance, is the better all-around fighter and more versatile athlete of the two, but has yet to fight anyone above the usual crew of journeymen and no-hopers fed to prospects. He can do a little of everything, showing signs of speed and power, but has never really demonstrated truly exceptional, elite-level gifts.

Up until now, the boxer-puncher´s biggest win has come against Raymundo Beltran, who would later revive a shaky career with back-to-back victories over over Henry Lundy and Ji-Hoon Kim. Other than that, it has mostly been cupcakes and battle-weary fall guys for “The Lion.”

The 24-year-old Bogere is 5’6″ and will be giving away a full five inches to the 5’11” Abril. This means that the African will need to take the fight to the inside. And, against a naturally grabby, awkward opponent like Abril, fans may be in for a long night of sweaty embraces if Bogere can’t be sharp enough to score and get out.

Bogere is the better fighter of the two, but Abril has the better general game plan. A victorious Bogere will need to work his way inside and score first before being dragged into the abyss by Abril’s tentacle-like arms. Abril, on the other hand, will need to establish a jab to keep Bogere at bay and simply smother the shorter fighter whenever the action gets less than an arm’s length away.

On the televised undercard, Gary Russell Jr. (21-0, 13 KOs) resumes his role has highly-regarded super prospect against hopelessly overmatched pug as he takes on Russia’s Vyacheslav Gusev (20-2, 5 KOs) in a ten-round featherweight bout.

To be fair, 27-year-old Gusev is probably a step up in competition from Russell’s usual victims. But with only one prior fight outside of Russia/Kazakhstan and no real quality wins on his resume, don’t expect much of a battle, either.

The 24-year-old Russell is one of the sport’s most talented young prospects, but has frustrated observers with an overall shoddy level of opponent, only recently upping the level of his opposition from putrid to slightly rancid.

However, even in a mismatch, Russell’s speed and overall athleticism are a joy to watch. Expect one of those entertaining mismatches against Gusev on Saturday.

Abril-Bogere, Russell-Gusev will be broadcast live on Showtime Championship Boxing at 10 PM ET/PT. The Boxing Tribune will provide a full recap of the televised card shortly following the telecast.