Hello friends and welcome. Grab a Guinness and temper a porterhouse steak (or perhaps a veggie burger) – Heat up your grill, activate your immersion circulator and flip on the exhaust, we have a hot topic to discuss today. This week’s Sunday Brunch is brought to you by Prometheus (the Sci Fi movie), but more on that later…

In case you haven’t heard by now, the man – Nay, the legend…Future Hall of Fame shoo-in Bernard “The Executioner” Hopkins (53-6-2, 32KOs) quite easily schooled one more young champion in Tavoris “Thunder” Cloud (24-1, 19KOs). At the same time he was conducting another of his master classes I do believe he schooled the majority of us watching from home and from the stands of the Barclays Center in Brooklyn, New York. 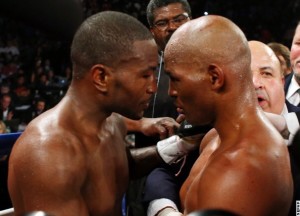 I really wanted to go with Cloud for the win last night. Something about everyone knowing (everyone except major betting outlets…Or did they? Uh oh, conspiracy theorists do your worst!) that Hopkins’ ring intelligence would prove too much for the relatively green Floridian made me want to go with the underdog, Tavoris Cloud. I often like choosing the ‘dog’ in certain fights, keeps things interesting.

I know what you’re thinking, most gambling arenas had Cloud leading as a slight betting favorite, hovering somewhere around -170 to +140, respectively. So why, you may ask yourselves did I just point out that Cloud was the underdog in my opinion?

Cloud is much younger, in fantastic condition and hungry. Couple that with him being undefeated (unless we’re talking about the Gabriel Campillo fiasco, which I did talk about HERE ) with a very high knockout percentage (76%) and there was a good probability for success, right? I mean come on, the guy is fighting a 48 year-old man for crisakes, he just HAD to win, right?

But who, exactly thinks like that? Your average once-in-a-while boxing viewer? The people for whom Gamblers Anonymous was designed for? The so-called boxing hardcore fan? Who believed that Hopkins’ age would be the deciding factor in facing another of the sport’s light heavyweight lions? And who, for that matter knew that the Executioner absolutely could not lose to Tavoris Cloud at this point in time?

These are fascinating questions to me – If for nothing else than it makes for a compelling study into the thought process of a sports devotee.

I suppose the mentality that most mainstream fight fans had, especially after reading their betting lines was that it was high time that B-Hop passed the torch to the next generation. They see the age differential and probably a few other edges on the tale of the tape in Tavoris’ favor and they figure that it’s a safe bet to go with the 31 year-old “Thunder” Cloud.

Then again, there are the longtime followers of the sport who knew of Hopkins’ many battles with the sports biggest stars. Immortal names like Oscar De La Hoya, Roy Jones Jr., Felix Trinidad, Joe Calzaghe and “Winky” Wright stud his professional history.

Years and years of championship reigns, from middleweight all the way up to light heavyweight, boxing junkies were very familiar with the who’s who list of names on his resume.

There were those who knew of Hopkins as the man who wins through savvy and intelligence rather than relying solely on technique, power or speed. And some who probably saw that it was a fight with an almost 50 year-old man against an undefeated champion in his prime.

Though I made no official prediction of what would transpire on Saturday night, I did choose Cloud to win a split decision, even knowing what I know about B-Hop. As I mentioned earlier, I sometimes pick the person who I think will lose, to win – Just for the simple fact that it’s entertaining to root for the underdog. That’s one of the reasons I don’t often predict fights and even more of a reason why I never bet on them.

Well, there was that one time I lost 100 USD to a friend over the Roy Jones vs. Joe Calzaghe fight. And there was that other time when Ricky Hatton came over the pond and fought pound-for-pound champion, Floyd Mayweather. Man, you have to love Ricky – he’s so affable. I mean, I knew he wasn’t going to win, however, at the time I wanted him to win so much that I was kind of blinded to the reality of the situation. I tend to choose from my heart rather than from what my brain says is the logical choice, so I can definitely relate to the different schools of thought regarding where people put their money when it comes to betting on boxing.

Smart, knowledgeable boxing aficionados were the ones who probably picked ‘Nard’ to emerge victorious on Saturday night (Shit, smart boxing aficionados probably picked against him, too. I know I did). Don’t get me wrong here, there’s anything wrong with being any other kind of boxing fan, in fact I try to talk to everyone I meet about the sweet science, even if they don’t want to hear it (HA!), so the more people who watch – even if only occasionally – makes me happy to have them enjoy the sport I love.

Just to put into perspective the long career that Hopkins has had, he turned pro way back in 1988. To put that into a different context for some of the younger readers out there, in 88′ the cost of gas was 91 cents a gallon. A ticket to your local cinema was around three and a half dollars. The haute technology at the time was a computer with a whopping 30MB HDD sporting 512K RAM…And that would set you back almost $1,300!

Also in 1988 the drug crack hit the streets. In the UK, the English Pound ceased to be legal tender. The Hubble Space Telescope was put into operation and we still use it (albeit an updated version) to glean insight from deep space.

Comparisons can quite easily be drawn to the Sci Fi movie, Prometheus’ giant super-species (revealed toward the end of the movie) and Bernard Hopkins. Both inspire foreboding feelings in their enemies, are physically and mentally superior and have achieved near immortality. Hell, Bernard even looks like them in the face. If you haven’t seen it and you’re into Alien or any of the sequels I suggest you get it from Redbox, it’s a good flick.

Well team, I hope this week we all learned something, perhaps even about ourselves. After breaking his own record as oldest world champion, I couldn’t stop thinking about Bernard staring into press row after he thrashed Kelly Pavlik with no one giving him a shot at victory. Let’s take a minute to enjoy Hopkins while he’s still an active fighter, there aren’t many like him out there. I trust you’ve had your fill of different configurations of random words this Sunday – Remember to floss and brush after every meal…Another Sunday Brunch is forthcoming, see you next time, cheers!