Welcome to another Monday Rant, coming from deep within my cement bunker in the hills of Central Mexico.

Rather than a teary-eyed tribute to Bernard Hopkins– something I could totally do– I figured on something a little bit different for this Rant.

Earlier this week we learned that Floyd Mayweather Jr. has the mentality of an adolescent and may have some issues with women. As shocking as it may seem, everyone’s favorite boxing villain may have some misogynistic tendencies. 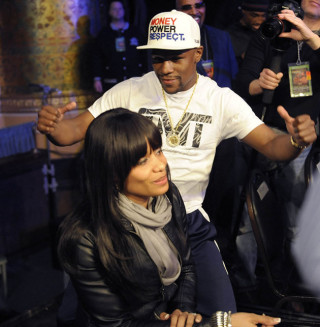 I’ll wait while you can settle down and grab a cold compress for your forehead.

According to columnist Terry Foster of The Detroit News, Mayweather mockingly gyrated his hips in the face of Cornelius Bundrage’s wife, Shawana, at ringside during the February 23 IBF junior middleweight title bout between Bundrage and Ishe Smith in Detroit.

The simulated face humping was tied to the action in the ring between Mayweather’s fighter, Smith, and Shawana’s husband, who would go on to lose his title via majority decision that night. It was also at the tail end of about two weeks worth of promotion where both sides exchanged heated words and Shawana, who is also her husband’s manager, stood on equal footing in the war of trash talk.

Terry Foster, however, sees the incident on fight night in a more social-sexual light:

“Shawana Bundrage did not deserve to have a man gyrate his hips around her face while watching husband Cornelius Bundrage fight in the ring last week at the Masonic Temple. She did not deserve a grown man getting in her face and screaming while minding her own business…We, too, often talk about how much we love our black queens and that they are the greatest women on Earth. But then we demean them in rap songs and, in this case, in public.”

Nobody likes to be Chippendaled in public while a whole crew of yes men and professional hangers-on cackle in the background. This would not have happened if Cameron Dunkin had been Bundrage’s manager, that much is true (Although it might be kinda funny to see it).

It’s also true that Mayweather doesn’t have much respect for women in general– at least not in the traditional sense of the word.

But Shawana Bundrage is no hothouse flower, helpless and all aflutter as the savages pick and pull at her flowing petticoat. Bundrage is a strong woman, engaged in the business end of the cruelest, most unforgiving sport. The fact that she’s a woman shouldn’t even enter into the equation.

For Mayweather it did, though. For Foster, it was also a factor.

Foster paints the picture of the damsel in distress, helpless in the face of adversity and in need of something, someone bigger and stronger to save her.

“What if your wife or girlfriend were at an event and some guy was pushing himself on her and screaming in her face? How would you feel?”

Shawana would opt  to not make a comment for Foster’s column. She knows that making a big deal about this incident would only cast her in the role of victim and make it harder for her to gain respect in the business. Foster, under the guise of protecting her honor and taking a shot at Mayweather, had no problem casting her in that light.

Everybody in the business has their own cross to carry. For Shawana Bundrage, one of those crosses happens to be that she’s a female in a male-dominated, often misogynistic business. She’s working in a world where most everyone, from top to bottom, has a locker room mentality and where big-assed ring card cuties in thongs parade around the ring between rounds.

This is boxing. Women in the sport know this and the strong eventually learn to work around it, earning the respect of their peers by being just as hard-working and just as tough as any man.

Floyd Mayweather was an ass for acting like a twelve-year-old kid. Terry Foster is a bit of a PC ass for calling this “bullying,” with the implication being that poor little Shawana Bundrage needed protection from the big, mean man.

Shawana did not ask for special privilege or extra consideration. And she’s not asking for the support and sympathy of a nation of PC do-gooders now. On the other end of every bullying case is someone who allowed themselves to be bullied. Shawana did not allow herself to be bullied. She acted with grace, strength, and then walked away from the situation when it became too ridiculous to deal with. She did exactly the right thing and, in the end, left Mayweather looking like the fool.

This would’ve been a dead issue, unknown by all except for Mayweather and his yes men. Foster, though, pushed her right back into the picture, tied her to the incident, and cast her as the victim she never wanted to be.

At the end of the day and in the grand scope of things, this is somewhat of a nothing story. Everybody knows that Mayweather has dedicated his outside the ring life to acting out his adolescent whims. Shawana Bundrage will go back to business and try to find a meaningful bout for her client/husband. Foster will find something else about which to vent his outrage.

And the women in boxing will go back to having to defend themselves from the drooling cavemen in the industry as well as the politically correct buffoons jumping in their way, trying to “save” them.

You can email Paul at paulmagno@theboxingtribune.com or watch as he’s secretly cyber-stalked by some of your favorite writers. Paul is a full member of the Burger King Kids’ Club, a born iconoclast, and an ordained minister in the Universal Life Church.