This Saturday, March 16, WBO welterweight titlist Timothy “Desert Storm” Bradley (29-0, 12 KOs) returns to the ring for the first time since winning a highly controversial gift split decision victory over Manny Pacquiao last June. Ruslan Provodnikov (22-1, 15 KOs) will provide the lit match to Bradley’s powder keg, in what is sure to be a high-action affair shown live on HBO World Championship Boxing at 10:15 PM ET/7:15 PM PT. The Home Depot Center in Carson, California will play host to the action, with a clash between junior welterweight prospects Jesse Vargas (21-0, 9 KOs) and Wale Omotoso (23-0, 19 KOs) serving as the co-feature. 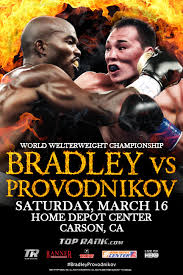 Despite the career best win in Bradley’s last fight, he isn’t coming in with a lot of momentum, or even support from his promoter. After a long holdout with his previous promoter, Gary Shaw, Bradley was signed up by Top Rank in 2011. After shaking off the rust against Joel Casamayor in his first fight under the Top Rank banner, Bradley was pitted against Manny Pacquiao, in a move that surprised no one. When the bell rang, it was clear that Bradley did what he was hired to do; come in and put up a spirited, but losing effort to Pacquiao. But two of the judges inexplicably saw the fight in favor of Bradley.

And his career has been in limbo since. After months of balking at potential opponents in hopes of a rematch with Pacquiao, Bradley’s hopes were crushed just as Juan Manuel Marquez’s right hand crushed Pacquiao’s face last December. With all viable options currently tied up, Bradley begrudgingly returns this Saturday against little-known Ruslan Provodnikov.

I call him “little known” because outside of hardcore boxing fans who view Friday Night Fights on the regular, Provodnikov isn’t a name that will ring many bells. The Russian with the heart of a lion has been in many exciting fights, however. He made a name for himself on ESPN’s Friday Night Fights. After dropping a curious decision to Mauricio Herrera to open up the 2011 calendar, Provodnikov came back to stop Ivan Popoca on FNF just three months later. Since the loss to Herrera, Provodnikov has gone 5-0 with 4 stoppages. Veteran former junior welterweight world titlist DeMarcus Corley was the only fighter to see the final bell.

This fight presents a volatile mix of styles. Both men like to come forward and mix it up, but Bradley has the better pedigree and is more versatile. Bradley is a guy who doesn’t do any one thing with any glaring efficiency. It is the little things that he does well that have carried him this far in his career. Bradley doesn’t commit to the jab often enough, rather he uses it as a distraction before coming with behind a right hand, his best punch. When Bradley is in close, his left hook will land with more force behind it than when he throws it from farther out, and he’ll dig to the body with the left hook. For his reputation as an offense-first fighter who’s at his best when he’s on the attack, Bradley has shown he can be effective when he’s forced to counter. When he moves his head he can make his opponent miss, and his hands are fast enough to counter effectively.

Provodnikov is a bit of a one-trick pony, with “go forward” being his dominant trick. It’s what he’s known for and he doesn’t go away from it. Provodnikov is rough around the edges, but he’s got good power and overwhelms his opponents with his volume.

Timothy Bradley isn’t always the guy with the better tool box going into a fight, but he has always found a way to win. Bradley isn’t the best at what he does, but what he does best is nullify what his opponent does best. Saturday night he’ll be the guy with the better tools and more experience putting those tools to use in big situations. Look for Provodnikov to get picked off on the way in all night. By the ninth round he’ll be bleeding from multiple cuts and his eyes will be swelling from Bradley’s well-timed counter shots catching him on the way in. Once the blood is flowing Bradley will be more on the offensive and he’ll turn it on and earn the stoppage on cuts.