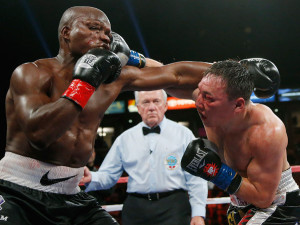 There could be plenty of angles from which to cover Saturday’s HBO-televised title fight.

One could point out the non-call of a knockdown by referee Pat Russell in the first round. A non-call, by the way, that could’ve turned a unanimous decision into a majority draw.

One could also point out the complete and utter lapses in technique and smarts displayed by Bradley, who put himself in tough spots several times throughout the contest by walking right into clearly telegraphed shots by the challenger.

However, what should be taken away from Bradley-Provodnikov is the pure heart and desire displayed by both in a fight that spoke volumes about their level of professionalism and respective amounts of testicular fortitude.

Provodnikov would almost end the battle before it began, though, as he stunned Bradley at will during the first two rounds and appeared to be one clean punch from ending it all on several occasions. To his credit, Bradley fought through the adversity, appearing to fight on pure instinct and will to survive, and would survive the early barrage.

An arm-weary Provodnikov in the third would allow Bradley to regroup and get his feet firmly planted. From there, a decision to box and use lateral movement would earn the defending champ some much-needed rounds on the scorecards and allow for him to do some damage of his own on the Russian.

A cut over the left eye of Provodnikov later in the fight would prove to have no effect on the pressure fighting challenger as he just kept pushing forward, stunning Bradley on occasions, eating some punches as well, but always looking for the one big shot to end it all.

Down on the scorecards, Provodnikov would follow up a solid eleventh round with a devastating surge in the twelfth that saw him hurt Bradley on several occasions and send him to the canvas with seconds to go in the fight.

After a thriller like this takes place, the question is always, “What Next?”

Nobody would balk at a rematch. Or maybe Bradley moves on to fight Juan Manuel Marquez. And, for the truly sadistic, how about the blood-drenched drama that could come with Provodnikov vs. the winner of Brandon Rios-Mike Alvarado II?

Vargas, the better-skilled and more polished fighter, had to deal with a ten pound weight disadvantage on fight night as well as a phantom second round knockdown before being able to claim victory.

Omotoso is a tough, durable fighter and was doing well in the first three rounds of the bout, but the class and versatility of Vargas became apparent as the fight progressed. Of the two prospects, it’s clear that Vargas has the most promise although both accounted well for themselves in this contest.

From the fourth round on, it was Vargas using smart movement, a well-placed jab, and a diverse head to body attack while Omotoso just kept pushing forward, relying on brute strength and a strong chin to keep him competitive. Against most opponents that would’ve been enough, but not against Vargas.