Hello family! Welcome to this week’s Sunday Brunch (Yes, I know it’s Monday), this week we look at what will surely be a fight of the year candidate when Timothy Bradley took on ESPN Friday Night Fights alumni, Ruslan Provodnikov. It was a helluva fight and I’ve broken it down into easy to chew dinosaur-shaped pieces for you to nibble on. As usual, it will be heavy with opinion, charm and unbiased view points. With that being said, I gave you your instructions in the dressing room, what I say you must obey – Cuidate, escucha me, toca los manos y buena suerte…Let’s get it on! 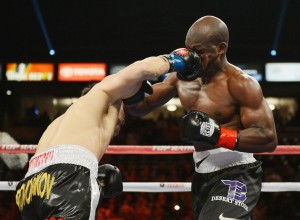 First off, I’d like to extend some major kudos to both Ruslan Provodnikov and Timothy Bradley. Ruslan took a step up not only in weight but also in class in facing the WBO welterweight titleist; Bradley showed us that even with the questionable decision against Manny Pacquiao last June, he does in fact have the character of a true champion.

After having the opportunity to re-watch the battle a few times since Saturday a couple of things became clear to me. Pat Russell, are you reading this? Retire, friend. It’s been a great ride but your time as a competent referee is over. For an unbiased fan watching at home, the veteran ref blew several calls including a knock down in the first when Bradley clearly was affected by the power of the Russian. Fine, it’s a slip…How about when he stumbled backwards when he was given the opportunity to stand? Blown call.

In the sixth round when some well placed shots from the “Siberian Rocky” crashed home and sent the WBO champion into the ropes and wasn’t called a knockdown, that becomes another erroneous judgement in my eyes.

In the closing moments, Bradley was sent flying to the ropes three times before a knockdown was actually called ten seconds before the final bell rang. That’s one knockdown in what could and should have been a 10-7 round.

Yes, I did have Ruslan Provodnikov winning that fight by a close margin, but even in defeat I do believe he proved to millions of people that he belongs off of Friday Night Fights and into the limelight on major televised events from here on out.

“How do you get new fans (waxed Jim Lampley during the broadcast)? Get whacked, get punished, show courage and come back.”

While Timothy Bradley did have spaghetti legs during the majority of the fight (not to mention he was out on his feet several times), his willpower and fighter mentality kept him alive in some tense moments throughout the many fire fights he and Ruslan engaged in.

Not to take anything away from “Desert Storm” by any means, however, even though he did technically out-land Provodnikov, most of those shots were shoe-shining pitty-pat punches. They most certainly add up, though – Not just in the eyes of judges but also in bruises, cuts and pain.

In a fight like this I just have to ask myself, who would I rather be (score cards aside) after the final bell? That would most certainly be the man on the losing end of the cards that evening. You can land a whirlwind of shots, but if the other guy is throwing dynamite he only needs to land a few punches to make a major impact. Case in point, Ruslan was smiling when Bradley would hit him and didn’t show any visible pain, whereas each thudding bomb Provodnikov would land sent the bicycle riding Timmy reeling and regularly snapped his head back.

After all was said and done, Bradley had trouble remembering what he said just moments earlier to an interviewing Max Kellerman, then went on to state that he was dizzy and most likely sustained a concussion early on in the fight. Ruslan would say that he didn’t feel Timothy’s punches at all (although those pitty-pat punches I mentioned earlier manifested themselves in several bad bruises and a slash over the Russian’s right eyelid).

I’m sure most of you have seen this fight by now, if not I suggest you do so immediately as this was one for the ages – Perhaps the best and most memorable in both of the 29 year-olds’ careers. Ruslan Provodnikov showed us that he truly deserves to be called the “Siberian Rocky”, he was willing to walk through hell to show his mettle. Timothy Bradley’s athleticism carried him when his defense (and possibly ring-smarts) failed him. Both deserve to be world champions and in Provodnikov’s case I do believe he’ll have more opportunities to become one on the back of this performance.

I hope you’ve had your fill of randomly configured words this week, we’ll see you again next time on the Sunday Brunch Super Show. Remember to always floss, gargle and brush your teeth – Keep your hands up and your head moving. See you soon friends, another Sunday Brunch is forthcoming.