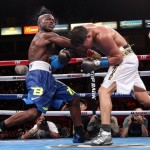 "This is exactly why referees should be forced to retire at a certain age. You can't be 100 years old and judging or reffing world class fights." - Paulie Malignaggi Hola familia y amigos, welcome to a withered and decrepit edition of Central America's highest rated, most money-spinning weekly proper pugilistic paper, The Sunday Brunch - We are the boxing column equivalent … END_OF_DOCUMENT_TOKEN_TO_BE_REPLACED

Hello friends and welcome to another episode of the Sunday Brunch Show. Today we will be touching on the fantastic firefight between Rios and Alvarado from the Mandalay Bay Center in Las Vegas, Nevada and also the future options for both of those warriors. Also on tap, we discuss Gennady Glovokin's knockout win over Nobuhiro Ishida and what's in store for him when he finally … END_OF_DOCUMENT_TOKEN_TO_BE_REPLACED 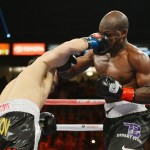 Hello family! Welcome to this week's Sunday Brunch (Yes, I know it's Monday), this week we look at what will surely be a fight of the year candidate when Timothy Bradley took on ESPN Friday Night Fights alumni, Ruslan Provodnikov. It was a helluva fight and I've broken it down into easy to chew dinosaur-shaped pieces for you to nibble on. As usual, it will be heavy with … END_OF_DOCUMENT_TOKEN_TO_BE_REPLACED

Two months after referee Pat Russell ruled a second round TKO loss against WBC light heavyweight champ, Bernard Hopkins in his defense against Chad Dawson at the Staples Center, the California State Athletic Commission (CSAC) has overturned the decision in favor of a no contest. The appeal hearing, initiated by Hopkins, featured several reviews of the controversial ending … END_OF_DOCUMENT_TOKEN_TO_BE_REPLACED

With the fourth fight only around the corner, The Boxing Tribune's panel of judges take another look at Israel Vazquez's stunning last gasp victory over Rafael Marquez to win via split decision. But did Marquez do enough to win on the basis of the opening rounds? Dafs117, Siren1927 and Sooterkin are the judges and will decide if the right warrior got the nod in the best trilogy … END_OF_DOCUMENT_TOKEN_TO_BE_REPLACED