Hello friends and welcome to another episode of the Sunday Brunch Show. Today we will be touching on the fantastic firefight between Rios and Alvarado from the Mandalay Bay Center in Las Vegas, Nevada and also the future options for both of those warriors. Also on tap, we discuss Gennady Glovokin’s knockout win over Nobuhiro Ishida and what’s in store for him when he finally decides to raise the bar in terms of who he’s squaring off against. With that being said, grab your Easter eggs because it’s going to be a full plate today! Don’t forget, I gave you your instructions in the dressing room; what I say you must obey – Cuidate, escucha me, toca los manos y buena suerte…Let’s get it on! 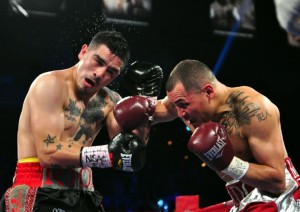 You always know you’re watching a special kind of fight when you stand up on more than one occasion and scream profanities at the T.V., especially when you’re viewing the brawl alone in your apartment with just your cat for company. Brandon “Bam Bam” Rios and “Mile High” Mike Alvarado’s second go-round was just that kind of a duel.

Their first match in October of last year had fight-of-the-year written all over it, but in my eyes was prematurely stopped by an overzealous (and perhaps senile) referee in Pat Russell. Yes, the very same ref to blow several coulda, shoulda been knockdowns in the other epic clash of 2013, the Timothy Bradley and Russian battler – Ruslan Provodnikov blitzkrieg. Thankfully, the extremely capable and quite excellent referee Tony Weeks did the honors this time.

The fight had many tell-tale signs of a fantastic night of action. The back and forth ebb and flow, sudden momentum changes, dynamic shifts in the crowd’s response and last but not least, lots of blood. Remember at the end of Rocky 4 after the Italian Stallion beat Ivan Drago by knockout? “I guess what I’m trying to say is, if I can change, and you can change – everybody can change!” Yep, it was that epic, albeit with more cursing and less warm squishy feelings from the combatants.

After it was announced that Mike Alvarado was indeed the winner, an obviously emotional Brandon Rios got in the face of the victorious Colorado native demanding a third encounter. “I gave you a rematch…We’re both warriors let’s do it again…Where’s Bob Arum?” he would yell during an interview being conducted by Max Kellerman. HBO’s commentator would go on to tell Brandon that he (Mike) seemed to rock him a few times during the fight. The extremely hyper Rios shot back “Your eyes are deceiving you, Max, because he didn’t rock me at all…We’re warriors we don’t get rocked…Mike go check your eyeballs.” A bloody and cut up Alvarado commented “Brandon gave me a shot to redeem myself, I’ll give him a shot for a trilogy.”

Were the scores predetermined? I don’t think so, regardless of some of the rumors floating around the internet this morning. Yes, I had it a bit more wide than the judges did, but who ever scores fights the same as boxing judges? At least the right guy won last night, that’s what is of utmost importance in our sport. As The Boxing Tribune’s commander-in-chief so succinctly put it last night after the fights, “There’s nothing wrong with boxing that can’t be fixed by what’s right with boxing…Keep the match-ups solid and the scoring honest and nobody will ever complain.” Amen.

So, what’s next for these two gladiators? A rubber match? Their esteemed and often insane promoter, Bob Arum has stated that they will likely take other fights before a third match will take place. Sounds to me like when he squandered the potential great engagement with Yuriorkis Gamboa and Juan Manuel Lopez a few years back. “I know what the fans want and they can go fuck themselves.” he said. That phrase always comes to mind when I hear old Bob throwing some rhetoric around regarding conceivable fights to be had.

That being said, I still say keep “Bam Bam” far away from pure boxers. We all saw what happened when Brandon, the #1 lightweight in April of last year, was pitted against the #9 ranked lightweight, Richard Abril. By most accounts (and by most I mean anyone with a working set of eyeballs), the fight was a landslide victory for the 5-to-1 underdog, Abril. However, even after failing to make weight for a second time – and getting a boxing lesson – somehow Rios was awarded a split-decision victory.

These two need each other the way that Micky Ward and Arturo Gatti needed each other, the way that Juan Manuel Marquez and Manny Pacquiao needed each other. Sometimes the whole is greater than the sum of its parts. Let’s hope that they make a speedy recovery so we, as fans, can be treated to another fantastic action packed night of fighting from these two.

In other news, the WBA and IBO middleweight champion of the world, Gennady Glovokin made short work of Japanese one-time interim titlist, Nobuhiro Ishida. The fight took place in Monte Carlo, Monaco, also on Saturday; Ishida promised to retire if defeated again prior to yesterdays’ fight. “GGG” almost sent the Osaka native flying out of the ring with a hard right hand to the side of the head in the third round.

When will we see the 30 year-old Glovokin in with some legitimate competition? The commentators in Monaco were talking him up like he was handing out reach-arounds and saying that he was the next Manny Pacquiao.

Triple G does have some very good potential but as a fighter you will always be measured by the level of your competition. There is a nice video floating around Youtube of Lucian Bute and Gennady Glovokin in the amateurs; a much younger Bute was stopped by the equally green Kazakhstani. There are a wealth of great matchups to be had at middleweight, I just hope that Glovokin gets to show what he’s made of on the main stage before passing out of his prime.

Thank you for joining us today, I trust that you all have had your fill of Brunch this fine Sunday afternoon. Remember to always brush your teeth, floss and don’t forget to gargle. Another Brunch is forthcoming, stay hungry, friends!