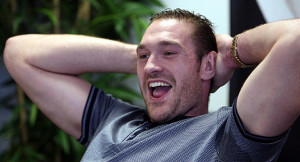 While Mannix is not generally known as a Klitschko-basher, this column relied on some old tropes concerning the heavyweight division, notions which are utterly played out. The underlying thesis that the heavyweight division is dead and needs “saving” from the Klitschko brothers has been shot down repeatedly by myself and others, but it still gets hauled out all too often by lazy American boxing scribes and presented as some kind of unassailable truth.

When a boxer of any weight class can regularly fill 30,000 seat stadiums, and have millions more fans watching him on TV, it would usually be safe to assume that said fighter is a superstar. But when it comes to the Klitschkos, both of whom possess such popularity …well, for many American scribes this apparently doesn’t count, because the butts both in those stadium seats and living room sofas are not stamped with the Stars and Stripes.

Yet the fact remains that the heavyweight champion Klitschkos routinely fight in front of more boxing fans than most other boxers on the planet–and even when they have fought in the supposedly anti-Klitschko USA, they have done very well numbers-wise (for example, Vitali’s HBO televised beatdown of Mexican-American Chris Arreola, in which the latter fighter was reduced to tears, was the network’s highest rated fight for 2009, and it wasn’t because Arreola is a household name).

As he explains in his column, Chris Mannix is convinced that Tyson Fury is the man to resuscitate what he sees as a dormant or dying heavyweight division. But even if we grant Mannix his questionable underlying thesis re state of the division, there is scant proof as of now that Fury is up to such a task, aside from the fighter’s own relentless self-promotion and a couple of decent wins on his resume.

The heavyweight division needs Fury’s “size,” his “talent,” and especially his “mouth,” claims Chris Mannix. Well, maybe. But perhaps Mannix should stop and consider the fact that Fury has of late stepped up his verbal attacks on the world champions in a way that is very reminiscent of another loudmouthed heavyweight who not long ago sold himself as the savior of heavyweight boxing and the man who would deliver us all from the tyrannical reign of Wlad and Vitali: Fury’s countryman, David “Hayemaker” Haye.

Haye of course, failed spectacularly in his mission. And in fact, since the Hayemaker has signifcantly toned down the bellicose rhetoric following his embarassing loss to Wladimir, Tyson Fury seems to have decided–or perhaps his promoter Mick Hennessey decided for him—that it would be a great idea to lift Haye’s old persona almost wholesale for himself.

Remember Haye’s tedious charges against the Klitschkos, repeated ad nauseum, leading up to the Wlad fight? Charges that were often inaccurate and borderline slanderous? If you loved those, you’ll love the current version of Tyson Fury.

Mannix apparently thinks we need more of boxers calling the Klitschkos “bitches” and “boring jab artists who don’t knock anyone out” if we are to “save” the heavyweight division. Haye regularly used these lines of attack, lines now being “furiously” recycled by Mannix’s savior. The problem is, the charges were spurious then, and they are still very suspect now.

“It’s strictly business with these Klitschkos because if it was about boxing, they would have thrown more punches and knocked guys out, because it’s not, they’re boring and jab people to death,” Fury, channeling the David Haye of 2010, said recently. At least when coming from Haye, who sports a KO ratio of around 85%, this criticism wasn’t quite as hollow as it is coming from Fury, who stops journeymen at a 70% rate, and who usually goes the distance with the above-average talents he faces, fighters like Kevin Johnson and Dereck Chisora.

Meanwhile the Klitschkos, who supposedly just jab and don’t stop anyone, sport much higher KO ratios than Fury: Vitali (never a “jab artist”) is at 87%, second highest of all time in the division after Rocky Marciano, and Wlad, who does rely more on the jab, is at 80% over 62 fights.

Of course, for many boxing writers who resent the Klitschkos, the accuracy of these hyperbolic anti-Klitschko statements is beside the point. They just want to hear someone bash the upstart Ukrainians who had the gall to take what used to belong almost exclusively to America. Figures like the late Angelo Dundee and super trainer Freddie Roach, true boxing people who should have known better, were taken in by Haye’s posturing and predicted that he would destroy Wladimir, so we can’t expect too much from the all-you-can-eat buffet muncher types in the boxing media who are trying to meet a deadline without thinking very hard.

Finally, Chris Mannix, in my view, makes another mistake when talking about prospective heavyweight boxing saviors: he seems to think that Americans in general will somehow be satisfied with a British heavyweight champion. Mannix even goes so far as to say that “Fury is loaded with potential, with the talent to win in the ring and the personality to be the first European heavyweight to be a star in the U.S. since Lennox Lewis.”

This is another example of flawed conventional wisdom in hindsight: the idea that world heavyweight champion Lennox Lewis was truly popular in the United States. If he was, I must have missed it.

More truthfully, the Canadian/Brit Lewis is far more popular in retirement than he was when he was actually fighting. I recall there was general euphoria in the USA when American contender Hasim Rahman knocked Lewis out. Many American boxing fans and writers hooked on Mike Tyson’s wildman antics fiercely resented Lewis, a chess-playing foreigner who came and took what they considered theirs, much as they would later resent the cerebral Klitschkos.

Lewis was often derided in the US as a “safety first jab artist” when he was fighting, a big man who didn’t tak enough risks in the ring (see his fight with David Tua). As he became dominant, he was also often labelled as stylistically “boring.”

Who knows, 24-year-old Tyson Fury and his younger cousin Hughie may develop and even come to dominate a post-Klitschko heavyweight boxing landscape, supplanting Wlad and Vitali. If they do, that’s fine with me.

Unlike Chris Mannix, however, I don’t expect, in the event of such a scenario, that the Furys–trash talk or no–will be any more popular or accepted in the United States than the Klitschkos are now … or than Lennox Lewis was in his heyday.

In such a case, the desperate search for the “real” heavyweight savior will continue.