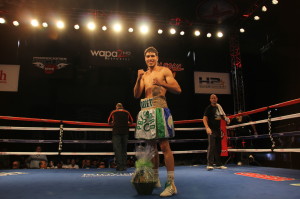 In the beginning moments of the fight the two combatants were happy to test the waters with each other as they wasted little time exchanging hard jabs and meaningful hooks to the body.

While Thomas was content looking to set up his power with a double jab feint, Colon displayed his ample amateur pedigree not only with his varied shot selection but with his ability to avoid the hard and wild shots the Miami native would often launch.

The first round came to a close with “Digget” Colon landing a series of hard uppercuts while administering a less than legal headlock.

Action resumed fast in the second with both men trading bombs – The majority of the Bahia Shrine now standing on their feet in appreciation as the heated exchanges continued.

A hard shot from the former amateur champion to the body of the debuting fighter, Thomas, seemed to put him into retreat until that very same body punch sent him to the canvas.

Patrick Thomas rose to his feet before the ten count was complete but was unable to continue; the referee waved off the fight at the two minute mark of the second round.

Watch the full fight video below: