This week’s Friday Night Fights from the Turning Stone Resort & Casino in Verona, New York is hardly a star-studded affair, but fans might be pleasantly surprised by two good, well-matched budget bouts that could deliver solid bang for the buck.

The biggest name on the show is middleweight upset specialist Brian Vera (22-6, 13 KOs), who finds himself in the odd position of being the favorite against Lithuania’s Donatas Bondorovas (17-3-1, 6 KOs) in a ten round bout at the 160 lb. limit. 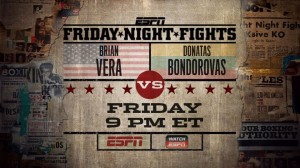 Vera is coming off back to back marquee upset wins over Sergio Mora and Serhiy Dzinziruk and has firmly and officially become a world title contender with the no. 1 spot below WBO titlist Peter Quillin as well as a no. 6 ranking by the WBC. The Texas native is a come forward brawler who lacks technique, but makes up for that with a heaping helping of grit and resolve. On the surface, Vera looks to be a sloppy fighter with, really, little more than journeyman potential. But two wins over Sergio Mora, a win over Dzinziruk, and a 1-1 split with Andy Lee say otherwise.

Bondorovas, a Lithuania-born Chicago resident, has nowhere near the resume of Vera and is also a stylistically much cruder boxer than Vera. A half-step-forward-at-a-time fighter, Bondorovas is a stalker with little ability to move laterally and little ability to adapt to an opponent who moves laterally.

The good news for Bondorovas is that Vera is not a mover and will look to engage. The bad news is that he lacks the firepower and offensive versatility to out-tough Vera. Bondorovas’s best weapon is a fairly heavy right hand, but he throws it like he’s flinging a Frisbee and it’s hard to imagine any quality fighter getting caught regularly with such a telegraphed shot.

All signs point to a mismatch in the FNF main event, but it’s going to be an entertaining mismatch for as long as it lasts because both Vera and Bondorovas are born battlers. Expect a mid-round stoppage for Vera in a fan-friendly tussle.

Junior and Savigne are similar in both style and mindset. Both are offense-minded fighters with massive defensive liabilities. The two fighters are also working against time as Junior, 27, and Savigne, 34, are long in the tooth as prospects. A loss for either would be deadly to their career plan.

The deciding factor in this contest could very well be experience. Savigne is a product of the stellar Cuban boxing program and has also faced the tougher opposition as a pro. Junior has been babied a bit by staying in the shallow waters of the Brazilian boxing scene (This will only be his second fight away from Brazil). Savigne has been tested a bit, Junior hasn’t. The best bet is always to take the more experienced fighter. In this case, the smart money will be on Savigne to take a competitive unanimous decision over Junior.