American flyweight Melissa McMorrow (9-3-3, 1 KO) made the trek to Germany to defend the WBO and WIBF titles against Nadia Raoui (15-2-1, 3 KO’s) at the GETEC Arena. This was McMorrow’s second defense of the titles she won last May, when she scored an upset decision in Germany over Susi Kentikian. Raoui was coming in on a four fight win streak, and is the current holder of the WIBA flyweight title (that title wasn’t at stake). 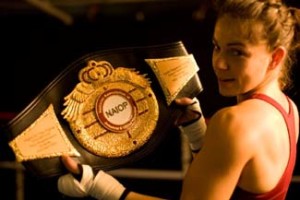 The opening rounds saw the champion start quickly, establishing a fast pace and utilizing a stiff jab to work her way inside, where she stayed busy attacking the body of Raoui. By the third round, Raoui started to find her rhythm, and was landing uppercuts and hooks on McMorrow, but McMorrow kept coming forward. Despite Raoui’s increased punch output, McMorrow stayed busy and kept solid control of the fight, keeping the challenger on her heels. It was close competitive bout until the end, with Raoui ended the fight strong, looking to turn a close fight in her favor before it ended.

After 10 hard fought rounds by both fighters, the result came back as a split decision in favor of Melissa McMorrow: scores were 99-91 and 96-94 for McMorrow and 96-94 in favor of Raoui. The difference in this bout appeared to be McMorrow’s aggression; she never took a step backwards the entire bout and kept moving forward regardless of what Raoui threw her way. The win is McMorrow’s third straight, and her second time in three fights defeating her opponent on their home turf. The loss snaps a four fight win streak four Raoui.

Also in Germany this past weekend, the vacant IBF welterweight title was up for grabs when Eva Halasi (11-6, 9 KO’s) met Ivana Habazin (10-1, 5 KO’s) in Berlin. Halasi was coming in off a loss to Mikaela Lauren (her second loss to Lauren), and had been unsuccessful in two prior attempts at world titles (KO by 5 Jennifer Retzke, KO by 3 Cecilia Braekhus). Habazin came in undefeated in 10 bouts looking to pick up her first world strap. In a closely scored, but unanimous bout, Halasi dealt Habazin her first professional loss in winning the IBF title by scores of 96-94 (twice), and 98-92.

In Mexico, former IBF and WBA flyweight champion Arely Mucino (17-2-1, 9 KO’s) stayed busy winning a unanimous shut out over Suri Tapia (7-2, 2 KO’s). After dropping Tapia in the first round, Mucino easily controlled the remainder of the bout, winning on all three score cards by scores of 100-89.

In other female action this weekend: on separate cards in Argentina, Natalia Aquirre (3-1) won a four round decision over Maria Lopez (7-6-2) and Jorgelina Veloso (3-0, 2 KO’s) stopped Pamela Diaz (0-1) in the second round. In Thailand, Anrey Sor Saenkamrang (3-1, 1 KO) won in six rounds over Napaporn Superchamps (7-6, 1 KO, and Pitza Sor Thischaroen (3-0) won in six rounds over Yokfah Nor Sripung (0-1).