To me, religion is like a warm, comfortable blanket. It’s something that makes you feel good. Even if you want to pretend that it’s bullet proof and will protect from all harm until you get up into some celestial paradise, that’s your prerogative.

The problems begin when you want to bring that cozy blanket to the workplace, the supermarket, etc. That’s when your feelings of comfort begin to impose on others’ right to not be blanketed. 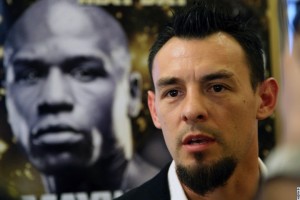 It always amazes me how many religious people adore the manly art of beating another human being to a pulp. Really, the fight game is no game to be in if carnage and blood takes up a large part of your “me” time. Personally, I’ve come to terms with my spirituality and the sport I love. Life is all about choice and about respecting the choices of others. In boxing, the fighters give of themselves willingly and are fully aware of the damage that could come, either immediately or down the line. Boxing is unlike the NFL, MLB, or any other sport. Any way you want to cut it, these are human beings engaged in combat for our amusement. This is not, at all, in line with any religious dogma.

My job is to help make sure that these guys are matched together under proper conditions and not abused by the disgustingly shameful business structure of the sport. As a boxing writer, you can’t be a moral person or a person with a supposed direct line to God and not be a bit of a reformer. To turn a blind eye to the sport’s shadier elements is a disservice to the sport, to the fighters, and to whatever religion you profess.

As a fighter, though, things get more complicated.

Just about everyone who steps in the ring talks about and gives thanks to God and fills their social media pages with all sorts of religious graffiti. Still, they are in a business where the prime objective is to beat the snot out of another human being.

Many will tell you that they invoke the name of their savior, not to pray for victory, but to give praise for their blessings and pray for everyone’s continued safety. That’s reasonable enough, but some take it to the next level and come off sounding utterly demented.

Recently, Robert Guerrero made an appearance on the 700 Club, the home of the religious lunatic fringe that believes God sends hurricanes as punishment to a gay-lovin’ Florida. He also made some odd comments about being on a mission from God during various pressers to hype his upcoming bout with Floyd Mayweather.

“I believe God does things for a reason,” Guerrero said. “I believe he put me here to humble Floyd Mayweather, and it is going to happen.”

Is this hype for the upcoming fight or some seriously delusional rambling? Remember, delusional people can often be very strong. Something doesn’t have to be true in order to be inspirational.

Guerrero is a very good fighter and, by all accounts, a good man. The struggle he put in with his wife during her battle with cancer was heroic. There’s no denying that as far as decent human beings go, Guerrero is right up there with anyone in the business.

But “The Ghost” should leave the God talk at home and ditch all the Blues Brothers “mission from God” stuff. It’s very unbecoming of a man of alleged faith. It makes it seem as though Guerrero is part of the water-headed “Jesus gonna smite you” crowd and it paints the deity as someone with an active interest in choosing sides of a professional boxing match.

Unless God plans on laying a huge bet on the 10 to 1 underdog, there’s no reason to believe that anyone of any celestial nature gives a rat’s ass about this fight. If there is some mighty being up in the sky, it’s more likely that he/she is troubled by the thought that any prizefighting is around at all.