Matchroom Boxing brings action back to Liverpool, U.K. this Saturday when hometown favorite Tony Bellew (19-1, 12 KO’s) puts his WBC Silver light heavyweight title on the line against South African Isaac Chilemba (20-1-1, 9 KO’s) in the main event of “No Retreat, No Surrender” at the Echo Arena. The bout, which has been rated a perfect five star match up by Boxrec.com, is also being billed as a WBC world title eliminator, the winner looking at a potential showdown with Chad Dawson. 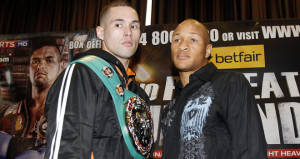 Bellew, who holds three light heavyweight titles, (WBC Silver, WBC International Silver, and BBBofC British) is three fights in after suffering a close decision loss to Nate Cleverly in 2011, a bout contested for Cleverly’s WBO light heavyweight title. Six months after the Cleverly bout, he came back strong in 2012, racking up three wins in seven months time. He successfully defended the BBBofC title, stopping Danny McIntosh in the fifth round, and then moved on five months later to grab the WBC International title, scoring a TKO over Edison Miranda. The WBC Silver title was added in November, with a one-sided 12 round decision over Roberto Bolonti.

Looking towards Chilemba, Bellew knows he’s in for a tough fight, a “war” as he’s referred to the bout on his Twitter account. As he told Sky Sports, “There is no easy way to beat this guy so I am going to have to go to the well because it is going to be a hard fight. It is going to be a nasty, hard, horrible fight but I’m prepared for that.”

Isaac Chilemba is also once beaten, and a former holder of multiple titles in both the light heavyweight and super middleweight division. Growing up as one of 10 children in Malawai, he’s no stranger to a tough challenge. He’s riding a 13 bout undefeated streak, with one draw coming against up and comer Thomas Oosthuizen back in 2010: a fight where some feel Chilemba was a victim of home town scoring.

In common with Bellew, he also faced Edison Miranda in 2012, taking a comfortable unanimous decision. He hasn’t fought since last September, winning an eight rounder over Rayco Saunders, his first bout under trainer Buddy McGirt. Fighting mainly out of South Africa, Chilemba has fought in the United States on a few occasions, but this will be his first trip to the U.K., and right into Bellew’s back yard.

Also on the card will be a rematch between lightweights Derry Mathews (32-8-1, 17 KO’s) and Anthony Crolla (25-4, 9 KO’s) for the vacant Commonwealth (British Empire) lightweight title. The two met last April with Crolla losing his BBBofC British lightweight title to Mathews by sixth round stoppage. Mathews would lose the title to Gavin Rees in his next bout and go on to lose in the semi-finals of the Prizefighter tournament in October. In December he scored a first round stoppage of Asan Yuseinov.

Anthony Crolla also took part in the Prizefighter tournament that October and like Mathews, he lost in the semi-final match up. He went on to defeat Kieran Farrell by 10 round decision on the same card as Mathews-Yuseinov. Crolla has held regional titles in both the super featherweight and lightweight divisions.

Rounding out regional title action on the card will be two 10 round bouts. James Dickens (13-0, 5 KO’s) meets Jon Fernandes (10-0, 2 KO’s) for the vacant BBBofC English super bantamweight title. This is Dickens first title bout, and second for Fernandes, who won the vacant BBBofC Southern Area super bantamweight title in November, defeating Jamie Speight over 10 rounds. An attractive bout on paper, neither fighter has much in the way of solid credentials: both their records consist mainly of opponents with records in the sub .500 area.

In his second professional bout, 2012 U.K. Olympian Thomas Stalker will be matching an opponent to be named.

No Retreat, No Surrender will be broadcast live from Echo Arena on SKY Sports 1HD. and on Wealth TV in the U.S.