Welcome back to another edition of Broken News: The one column dedicated to rounding up the news that doesn’t make the cut of the Tribune’s newly-hired News Editor Ruben Diaz, and seeing what passes the smell test and what smells like it dropped from the hind quarters of a bull. This week’s edition takes a look at a couple of the worst awards handed out by the BWAA and Robert Guerrero’s claim of divinity in his May 4 mission.

When one thinks of shamefully low standards, the Boxing Writers Association of America (BWAA) is the exact opposite of what comes to mind. I kid…I kid. Regular readers of The Boxing Tribune are well aware of the splatter shot standards, pliable ethics, and general laughable nature of the organization as a whole. The BWAA’s Annual Awards came out this week, and the once-venerable Thomas Hauser took home the Investigative Journalism Award for his two-part waste of cyber space “The PED Mess”, featured on MaxBoxing.com.

There was a time when investigative journalism involved uncovering new facts that were previously unknown. For all of the hot air spewed forth amongst those few thousand or so words, Hauser did little more than stamp a reputable name on the hide of a dead horse already beaten to death by a certain PED crusader who acts as more of a PR rep for VADA and Victor Conte than a real journalist. To say Hauser took the easy road would be an understatement. His two-part snoozer started off with a cheap rumor, followed by endless talking points and quotes already trodden upon by Conte and his magical metrosexual ReTweet fairy.

Another laughable winner of a BWAA Award was HBO’s Max Kellerman, who took home the Sam Taub Award in Broadcast Journalism. There was a time when Kellerman put forth a product that showed the potential to be a worthy successor to Larry Merchant, who at the time was already far past his useful prime and was a caricature of his old self. But the Max Kellerman of today is little more than a wide-eyed fan boy, fawning at the altar of the products being sold to a (mostly) willingly ignorant public.

The BWAA needs to do us all a favor and stop pretending they aren’t awarding mediocrity.

Bet on Robert “The Ghost” Guerrero, ladies and gentlemen. If the long odds weren’t enough of an enticing factor to lay down the mortgage on the underdog, it appears now that a Robert Guerrero victory is what God wants. “I believe God does things for a reason,”Guerrero said at a recent press luncheon. “I believe he put me here to humble Floyd Mayweather, and it is going to happen.” 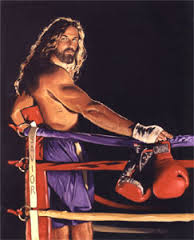 Let me let you in on a little secret, kids. If God existed, he couldn’t care less who won any particular sporting event. It wouldn’t be on the radar of an omnipotent being who allegedly created the world in six days, can see and hear anything and everything, and has a divine plan for all 7-billion plus people on the planet…except for those pesky Scientologists and their E-meters.

Religion can be a good thing for some. It can give one the illusion that some celestial being is granting strength to a person that could not otherwise conjure up on his/her own. Religion is a source of comfort when one suffers a death in the family, allowing grieving family members to find solace in thinking their favorite relative is up in heaven having a game of catch with Jesus.

Religion can even be a wall from which bigots like Pat Robertson, whose 700 Club program Guerrero appeared on Monday morning, to hide behind and preach widespread ignorant bigotry and hate. Religion can also be offensive to those who base life on logic, reason, and reality. Far too often, one’s deity is credited where credit is not due. Case in Point; “A lot of people thing I’m crazy, but I think you’re crazy for thinking that I’m crazy. Just look at my wife. She asked the Lord to heal her and he did,” Robert Guerrero would tell reporters.

Just stop it, Robert. To anyone with a shred of critical thinking skill, the previous statement reeks of a plea for attention, not to mention ignorance to the difference between the perceived power of prayer and the actual power of a willing marrow donor and the best surgeons money can buy.

Pros and cons of religion aside, it should be handled like that time you accidentally soiled your britches while doing the dishes; it’s best if you keep it to yourself. Most importantly, religion has no place in a sport where inflicting physical harm is the name of the game.

Writer’s note: It was reported early on March 28 that Robert Guerrero was arrested at JFK International Airport for attempting to bring a gun on an airplane. No news yet on whether God lost interest in this fight or he’s thrown his hat in Mayweather’s corner.

You can send hate mail to Tim at timharrison65@gmail.com, or send it in 140-character chunks to him on Twitter atwww.twitter.com/TheTimHarrison.