There was a time, back in the good old days, when simply winning a world championship would serve to prove a boxer’s worth. This was back in the days when there was generally only one ‘world’ champion per division and boxers often had to be something special just to secure a title shot in the first place. Today it is sadly very different, with a multitude of so called ‘World Champions’ at every weight division, and almost more champions now than contenders. The reality of boxing today is for boxers to prove themselves after winning a ‘World Championship’. 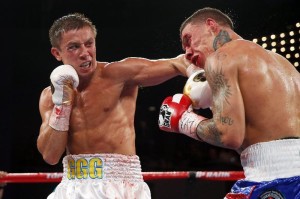 When Gennady Golovkin defends his WBA Middleweight title on Saturday, at Monte Carlo, Monaco, against Nobuhiro Ishida, he will be seeking to consolidate his position as one of the best 160 pounders in the world. Since Golovkin took hold of the WBA title in 2010, with a 3rd round knockout over Nilson Julio Tapia, the Kazakhstan fighter has been building a formidable reputation with a series of brutally efficient defences. Golovkin has a style which appeals to the fans. Once a counter puncher, who fought in 350 amateur fights and picked up a Silver medal at the 2004 Olympics, as a pro, Golovkin has adopted an aggressive stalking method which is entertaining and TV friendly.

Coming forward with a snaking, punishing jab, the ‘GGG’ man as he calls himself, unloads with both hands when he sees an opening and his relaxed, heavy-handed approach to his work has attracted more fans with every outing. His 10th round stoppage of tough former 154 Champion Kassim Ouma in 2011 was a breakthrough performance for Golovkin that made many in boxing take notice of him for the first time. Gennady’s punishing defeat, of the previously never stopped Ouma, contained the kind of X-rated action for which Golovkin has become well known and popular.

In his first appearance in an American ring last September, televised by HBO, Gennady dismantled Grzegorz Proksa in five rounds, flooring him 3 times and provoking HBO to the conclusion that they might have a new star on their hands.

Golovkin’s management sees 2013 as a crucial year for their fighter, a year in which he will try to mark himself out as the premier champion and number one fighter at 160 pounds. Since the division is perhaps one of the deepest in boxing, this will be no simple task for Golovkin. The other title holders at 160 pounds, IBF champion Daniel Geale, WBO champion Peter Quillin and WBC champion Sergio Martinez, are all talented boxers in their own right. Sergio Martinez is generally regarded at the moment as the ‘real’ World Middleweight champion, in addition to being considered one of the best pound for pound boxers in the world also. Golovkin would like to raise his standing in boxing to the level currently enjoyed by Martinez, and a fight between both men is already one of the most talked about and anticipated in boxing. Whether it will ever happen is another thing entirely. As Golovkin’s reputation has grown over the past two years, Martinez’s people have barely acknowledged the Kazakhstan’s existence.

Golovkin is expected by most to overcome his latest challenger, Ishida, without much trouble, but the Japanese man is awkward and tough, and has never been stopped in his career. In his last two fights, Ishida has been beaten by Paul Williams and the WBO champion Dmitry Priog (prior to Priog being stripped of the title). In both fights Ishida showed a good jab and a big heart and a stubborn resistance that took him the distance. Despite only nine of his twenty-four career victories coming via knockout or stoppage, Ishida scored his breakthrough win in 2011 with a stunning 1st round stoppage of the previously unbeaten James Kirkland. Such a result against Golovkin is almost unthinkable, especially considering that the Kazakhstan champion has taken enough punches in his recent fights, to show that he has a sound chin. However, as always in boxing, nothing can be taken for granted. Although Ishida may be hanging onto the declining wave of his Kirkland victory, it is still a warning sign against any complacency for the champion. Ishida’s greatest weapon in this fight is that he has nothing to lose, while the champion has everything to lose and perhaps less to win.

It could be said that Gennady finds himself in a bit of a no-win situation, in this, the sixth defence of his title. He is expected to win and in some quarters to win easily. Many expect him to become the first man to stop Ishida. Anything less than a stoppage victory for Golovkin will be viewed by some as a disappointment and add to the small, but vocal, faction in boxing who view the champion as an over-hyped media creation. Some negative viewpoints of Golovkin are that, he is exciting because he is one-dimensional and easy to hit, and that his much vaunted punch power is overrated in the extreme.

In his last defence, just nine weeks ago, Golovkin managed to impress and disappoint at the same time. The ‘GGG’ man served up another red blooded dose of heavy hitting and toe to toe exchanges, as he battered a tough Gabriel Rosado about the ring for seven rounds, cutting and staggering him, until Rosado’s corner pulled him out. The sheer intensity of Golovin’s performance won over most fans, but there were others who questioned the champion’s failure to score a clean knockout, or even register a knockdown. Even when it emerged after the fight that Gennady had fought with a temperature, the doubts stuck. Is Gennady as good as he is being hyped up to be? This is a question that only time and bigger fights can tell.

If Gennady is to lift himself above the crowd of current ‘world champions’ and mark himself out as one of boxing’s elite, then he simply must become the first man to stop the Japanese challenger this Saturday night. If he is to gain the sort of matchups which he and his team crave, especially unification fights with the other ‘champions’, then Gennady needs to continue serving up his own brand of x-rated boxing. In other words, he needs to keep beating up and knocking out everyone put in front of him.

After its acrimonious split from Golden Boy Promotions, HBO is under pressure to find new stars who can pull in the fans and pay-per-view numbers. Despite so much having been said over the years about ‘the sweet science’, most boxing fans like nothing more than a fighter who can punch hard. With his friendly, mild mannered out of the ring persona, contrasting sharply with his all action in the ring identity, Golovkin has a head start on many of his fellow champions.

Saturday nights fight may well be another step for Golovkin to becoming one of HBO’s biggest attractions. Especially if he can stay x-rated.