What would a Friday Night Fights be without some sort of controversy? This Friday’s edition from the Turning Stone Resort & Casino in Verona, New York was light on judging drama, but heavy on ref drama as the solid main event between Brian Vera (23-6, 14 KOs) and Donatas Bondorovas (17-4-1, 6 KOs) was stopped after seven entertaining rounds over, apparently, a between-rounds misunderstanding between the ref and Bondorovas. 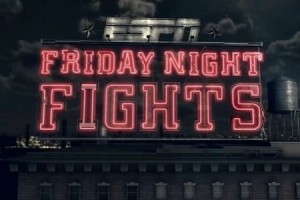 Through seven rounds, the FNF main event was giving fans a nice little show with the more experienced Vera fending off a forward-marching Bondorovas. The bout was close, but Vera was certainly starting to pull away as the fight progressed.

Scar tissue on the bridge of Bondorovas’ nose started giving way as early as the second round and, by the fifth, the Lithuanian had to contend with a cut near the inside of the right eye as well.

Still, the bout progressed with both fighters’ defensive liabilities allowing for a nice ebb and flow of action while exchanging wide, swinging right hands that landed, practically, at will.

After the seventh round, referee Charlie Fitch went to check on Bondorovas and inquired about whether the fighter could still see. Bondorovas, who isn’t a native English speaker, responded through corner translator. The answer “Not Good” was then relayed to the ref by trainer Sam Colonna.

At that point, Fitch waved off the contest and officially called for the TKO.

After the bout, Bondorovas and his corner bitterly contested the decision and claimed that it had all been a misunderstanding based on the language barrier.

Whatever the case, Vera got the win and will now likely move on to a big fight, either with Julio Cesar Chavez Jr. in June or against WBO champ Peter Quillin later in the year.

In the co-feature, Humberto Savigne (11-1, 8 KOs) showed his pedigree in stopping an overmatched Jackson Junior (14-1, 12 KOs) in four rounds of a scheduled ten.

Thought to be a fairly competitive bout with two ranked light heavyweight prospects, Brazil’s Junior proved to be at least a couple of levels below his Cuban opponent in the one-sided showing.

Savigne hurt his opponent often, repeatedly landing the heavy right hand that proved to be the only punch he really needed for the task at hand. Junior would hit the canvas once in the second round and three times in the fourth before the bout was officially waved off.

In the two four-round televised time-fillers, Taras Shelestyuk (1-0, 1 KO) made his debut with a dominant first round TKO over Starbucks barrista, Kamal Muhammad (0-1) and Antoine Douglas (5-0, 3 KOs) took a four round decision over John Worthy (3-6, 1 KO) by three scores of 40-36.