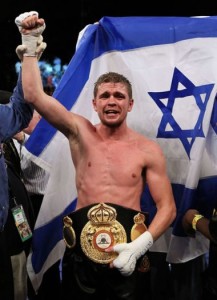 Yuri Foreman (29-2, 8 KO’s), the former WBA middleweight champion, will meet Gundrick King (18-9, 11 KO’s) in a scheduled six round bout. This will be Foreman’s second bout since a two year layoff that followed back to back losses to Miguel Cotto (TKO by 9) and Pawel Wolak (RTD by 6).

Foreman showed tremendous heart in the Cotto bout, fighting for two rounds virtually one legged when a knee injury in the seventh round prevented him from putting any pressure on his right leg. After undergoing ACL and meniscus surgery, he met Wolak nine months later and was stopped after the sixth round. Foreman returned to the ring two years later on a Broadway Boxing card, shutting out Brandon Baue over six rounds.

Former NABF light welterweight champion Gabriel Bracero (21-1, 4 KO’s) is also on the comeback trail after suffering his first defeat to the wily veteran, DeMarcus Corley in January of 2012. The bout was a war, with Bracero being dropped three times, but coming back to drop Corley later in the fight. Despite the three knockdowns against him, Bracero kept the bout close, losing by just two points on two of the judges scorecards. He came back strong in the remainder of 2012, notching three wins before years end: the most recent being a fourth round stoppage of Johnnie Edwards in December. This will be Bracero’s fifth straight bout at the Roseland Ballroom.

Bracero meets Pavel Miranda (17-9-1, 8 KO’s). Miranda is a former WBC Youth and Caribbean light welterweight titlist. He’s lost five of his last six outings, most recently being stopped in the first round by undefeated Frankie Gomez.

Luis Orlando Del Valle (16-1, 11 KO’s) was last seen on Showtime last September, in a losing bid against Vic Darchinyan where he dropped a ten round decision for the vacant NABF super bantamweight title. Del Valle is a former New York State and NABF featherweight champion.

Del Valle faces Andre Wilson (13-5-1, 11 KO’s), a former USBC bantamweight titlist. After suffering four consecutive losses through 2009 and 2010, he fought once in 2011 scoring a first round knockout of Levi Martin. He was then inactive for two years, but returned this past February, stopping Ryan Pederson in the third round. This is Wilson’s first trip to New York.

Rounding out the headliners will be the former NABA light welterweight and Caribbean welterweight champion Ionut Dan Ion (30-2, 17 KO’s), aka, Jo Jo Dan, taking on Damian Frias (19-6-1, 10 KO’s) in a scheduled eight rounder. Ion, who’s fought mostly out of Canada, has only lost to one fighter: Selcuk Aydin. He met Aydin twice, losing both bouts by 12 round decisions; both being decided by one point on two of the judges scorecards. He last fought Franklin Gonzalez in December, stopping him in the fifth round.

Frias, fighting out of Miami, comes in on a two fight losing streak, both 10 round decisions. He’s had an up-and-down career over the last four years; dating back to 2009, he ran a streak of three losses, a draw, three wins, then two losses, bringing him to this bout with Ion. In his six losses, Frias has never been stopped.

Under card action will see amateur standout Patrick Day (2-0, 2 KO’s) take on Yosmani Abreu (3-6-1). Day entered the pro ranks in January, and has won both of his bouts by first round stoppage while Abreu, who fought seven times in 2012, is riding a three bout losing streak.

In female action, undefeated Heather Hardy (4-0) meets Mikayla Nebel (0-4) in a rematch. Hardy met Nebel in her pro debut, an action packed fight that saw Hardy dropped in the first round, but come back to sweep the remaining three and take a unanimous decision.

Broadway Boxing will be shown live on Go Fight Live, www.gfl.tv starting at 7 pm EST. The card will be televised at a later date.