While last week’s Vera-Bondorovas Friday Night Fights show lacked star power, this week’s edition from the Chumash Casino in Santa Ynez, CA, will feature even lesser-known talent– Unless you happen to be from Peru.

After the original main event of Marvin Quintero-Ammeth Diaz fell apart due to Quintero breaking his nose in training, Maicelo-Nugaev, the other lightweight bout on the card, was elevated to the top spot. 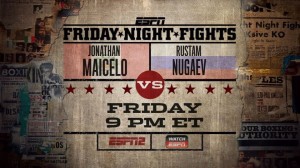 Apparently, the 29-year-old Jonathan Maicelo (19-0, 11 KOs) is a big deal in his native Peru, able to sell out 15,000 seat arenas and already boasting a nice portfolio of regional endorsement deals. In the States, though, he’s as unknown as any other 20-something lightweight prospect without a major TV deal.

Maicelo possesses good hand and foot speed and is, overall, a solid, athletic fighter. But like any prospect who has yet to face a lot of quality opposition, he makes some mistakes due to impatience and a lack of well-honed overall skill.

Tending to get over anxious, Maicelo jumps into attack mode before really having anything planned. The end result is a lot of awkward moments inside with an opponent confused by Maicelo’s push forward and a Maicelo without anything real to throw. This is the flaw of a kid without a whole lot of high-end pro experience, but at 29 he has to be considered behind the learning curve at this point.

Up until now, the Peruvian prospect, who has fought his last three bouts in the United States, counts a unanimous decision win over Fernando Angulo and a TKO 3 victory over Daniel Attah as the biggest wins of an eight year pro career.

The pre-fight billing for this contest is that Russia’s Rustam Nagaev (22-6-1, 12 KOs) is the more experienced fighter with the much deeper resume. And while it may be true that his ledger is better than Maicelo’s, the depth of Nagaev’s pro resume is not that much better. With most of his fights in Mother Russia– not exactly known as a hotbed of lighter weight talent– Nagaev has fought just as many no-hopers as his opponent, but has also faced some solid international fringe contenders such as Alisher Rahimov and Dennis Laurente (He dropped unanimous decisions to both).

Overall, Nugaev is just an okay fighter. He has a respectable work rate and possesses a solid chin, but doesn’t bring all that much else to the table. The Russian’s professional high-water mark is still a 2008 TKO 2 win over faded Ugandan world title challenger, Justin Juuko.

Maicelo should take this lightweight contest via not-so-scintillating unanimous decision.

Tolmajyan, 27, has the better overall skills of the two, but has three big strikes going against him this Friday.

First, he’s a natural featherweight facing an opponent coming down from junior welter. Second, Maysonet’s wild, looping right hand may be the perfect weapon to take out a basic, no-frills southpaw like him. Third, he’s lacking in anything even resembling a heavy punch.

While Tolmajyan is cautious, careful, and professional, Maysonet is a ball of energy who flings punches from all angles. The wild right hand is the best in his arsenal, causing legitimate damage wherever it lands. Nine of Maysonet’s ten knockouts have come in the first round with the tenth knockout registered in the second. He’s only been past two rounds once, a unanimous four round decision scored in his second pro fight. Tolmajyan, on the other hand, has been eight rounds on three occasions.

Conventional boxing wisdom dictates that Tolmajyan’s best chance to win is to weather the early storm and take his younger opponent into the later rounds. At this point in his development, the high-energy Maysonet is not built to go more than a couple of rounds at the most. Fortunately for him, he has yet to really meet an opponent who can handle his power for too long and Tolmajyan, as solid as he is, lacks the power to keep Maysonet honest.

The Armenian will have to fight the perfect fight and stay on his feet to secure victory. Maysonet just has to be Maysonet.