Just when you thought it was safe to read heavyweight boxing news, James “Lights Out” Toney has returned once more, making the same old noises he’s been making since he ate his way into the division and utterly failed to make the explosive impact he has long predicted for himself. 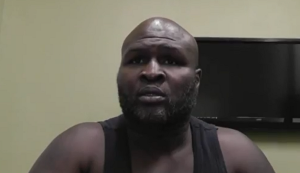 The once-great Toney, of course, hasn’t had a meaningful victory in the ring in years.

His last win over a decent quality heavyweight was a 2008 split decision against Fres Oquendo, a fight that most objective observers saw as a robbery (the dissenting judge, correctly in my view, had the fight 116-110 for Oquendo). Before that, Toney’s attempts to secure a legit world heavyweight title faltered: he beat John Ruiz in 2005 to win the WBA strap, only to lose the fight because he tested dirty for PEDs, and drew with a faded Hasim Rahman in 2006 when vying for the WBC title.

Really, Toney hasn’t been the same since his two losses to the formerly feared Samuel Peter (who Toney now claims he “ruined” — uhhh, no James, it was Vitali Klitschko who did that) in 2006 and 2007: the first fight, which one can make a good case for Toney winning, was the veteran’s last solid performance in the ring. The second fight saw Peter knock Toney down, beat him up, and seemingly kill off his boxing career.

Toney’s professional “death, ” however, didn’t deter him from stumbling on, like a biter from The Walking Dead. Since that somewhat sad second Peter fight, Toney has sounded increasingly desperate and delusional, when one can understand him at all. Most interviews with Toney over the last few years have consisted of a lot of slurred diction peppered with a few recognizable phrases, mainly, “I’m the real heavyweight champion,” “The Bitchko sisters” and “David Gaye.”

Toney, while observably shot, at least has some pressing reasons for wanting to fight on: when the State of California released its list of its top tax deadbeats last year, Toney was listed as owing $354,000 . What really rankles, though, are some of those in the “boxing media” who allow Toney to make outrageous false claims about himself and his perceived enemies during interviews without making any attempt to inject a note of reality into the proceedings.

These types function as the fighter’s enablers, helping him to create a dangerous fiction about himself and his abilities circa 2013 (call it “The Toney Zone“) — and it’s amazing, when looking at reader comments under such stories, just how many boxing fans are still taken in by the fantasy Toney and his media minions weave.

The king of this school of Toney Zone “journalism” is of course Eli Seckbach, a videographer whose interviews with Toney always find him egging the woozy old fighter on into making some outrageous statements, like a kid poking a caged animal at the zoo with a stick.

This finally backfired on Toney recently when Seckbach prodded him into threatening ESPN boxing scribe Dan Rafael with physical harm during a filmed interview . Rafael’s crime? Questioning the wisdom of a proposed fight between Toney and Tomasz Adamek out of concern for Toney’s deteriorating health.

After news of the Rafael-threatening video went viral, Toney was quickly dropped as a proposed dance partner for Adamek, even though he quickly issued an apology via Seckbach. The thin-skinned Rafael, however, had by then ripped Toney during an online chat session as being “angry, brain-damaged and broke“.

Since then, Toney has appeared in Seckbach’s videos less frequently, though the videographer continues to champion him, still a willing resident of The Toney Zone.

Easily cowed print journalists also all too often let Toney off the hook and march willingly into The Toney Zone. In a recent interview with James Slater of Fight News, Toney–who is taking on rising Australian power puncher Lucas Browne on April 28– hauls out his hoary old greatest hits, mostly lines we’ve seen contradicted by reality many times in the last few years: he “has the fire back,” is “in tremendous shape,” and feels “the same way I did before my (2003) fight with Evander Holyfield. That means [Browne’s] in trouble! Put it out there, I’m the real heavyweight champion and I’m the best heavyweight out there.”

Slater dutifully “puts it out there” as requested, but not quite as shamelessly as Seckbach. Not that Slater ever challenges Toney with even a tiny shred of truth regarding the last half-decade or so of his career. Nope. He does allow for the fact that not everyone agrees with Toney’s assessment of himself (“Toney’s critics say he was past his best, even finished, some time ago”), but never directly confronts Toney with this notion.

Overall, the effect of the interview is to give Toney the benefit of the doubt, even though the facts say that he doesn’t deserve it at this point in time: the laws of The Toney Zone remain in full effect.

The biggest victim of The Toney Zone, of course, is going to be the fighter himself.

James Toney gives the unavoidable impression that he is going to continue fighting until someone hurts him very badly: until an opponent turns out the lights for good.

And no doubt those media types who have helped him prop up the notion that he is–at the advanced ring age of 44 and with the observable accumulated damage from many years of ring wars–still a viable heavyweight contender, will happily and obliviously go on with their lives when James Toney is finally forced to deal once and for all with his own darkening reality.