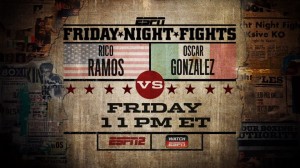 When the first bell rings for the main event fight tonight on ESPN’s Friday Night Fights, we will all be treated to a unique battle.  A bout scheduled for 10 rounds between former world-title challenger, Rico Ramos, against Mexican-born Oscar Gonzalez.

Ramos(21-2, 11 KO’s), is looking to rebound from his last bout(a loss to prospect Ronny Rios in January) – and now faces Oscar Gonzalez.  Gonzalez(20-2, 14 KO’s), is a rugged challenger looking to stop Ramos in his tracks, and raise his profile in the process.

However, given both fighters’ track records, there really is no favorite here.  This writer sees it as a pick ‘em fight in which either man can really re-establish himself and career.