This week’s Friday Night Fights main event from the Tropicana Hotel & Casino in Atlantic City, New Jersey has the potential to be a real mismatch. But, then again, not enough is known about one of the fighters to really make that call.

Interim WBA featherweight titlist, Javier Fortuna (21-0, 15 KOs) will make the first defense of his belt against unknown entity, Miguel Zamudio (25-1-1, 13 KOs) in the televised main event and it’s hard to really know what to expect. 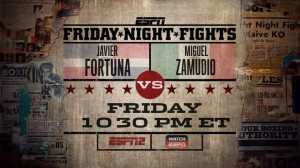 The 23-year-old Fortuna, from the Dominican Repoublic, is one of the sport’s best young prospects, but he showed some tell-tale signs of inexperience in his belt-winning performance against Patrick Hyland last December on the Manny Pacquiao-Juan Manuel Marquez undercard. Still, the kid is bursting with raw talent and, flaws and all, can steamroll most opposition.

His opponent, Zamudio is probably a stranger to most fans, unless they happen to frequent the Sinaloa club scene in Mexico. Zamudio is untested and has been matched extremely light, somehow earning a shot at the “prestigious” interim title by beating opposition, in his last three fights, that had a combined 43-38-2 record. The only distinction on an utterly pedestrian resume is that Zamudio once fought at a function for the regional chapter of the Mexican chef’s union.

The FNF co-feature, however, could be an entertaining, competitive affair.

Jackson, from the U.S. Virgin Islands and the son of two-division former world champ Julian Jackson, is certainly the more well-traveled of the two fighters and also has the edge in overall level of opposition, but Fort has done well on the limited Minnesota fight circuit, has decent skills, and fairly heavy hands. Jackson-Fort could produce some fireworks as a contest between two fighters that match up well in terms of skill and overall ability.