Alamodome, San Antonio, Texas– Saul “Canelo” Alvarez (42-0-1, 30 KOs) won the fight with Austin Trout (26-1, 14 KOs), but appears to be still mired in an ongoing effort to win his share of respect in the American media. 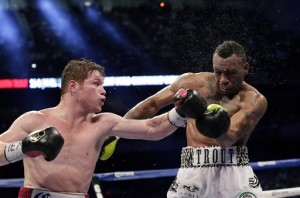 Fighting in defense of his WBC junior middleweight title and challenging for Trout’s WBA belt, Alvarez showed solid improvement in defense as he easily slipped Trout’s busy, flicking jab. While some were mesmerized by Trout’s churning fists, the real boxing was going on during rare actual exchanges where Alvarez consistently landed the bigger and better shots.

In the seventh round, a straight right hand buzzed Trout and sent him to the canvas. The native of Las Cruces, New Mexico would beat the count and manage to take most of the rest of the round, but the little commitment Trout had on his punches up until that point was mostly gone after the knockdown.

Trout had his moments over the second half of the contest, but each round played out similarly with his mostly ineffectual busy work matched against Alvarez’s less frequent, but more effective boxing.

At the end of twelve rounds judge Stanley Christodoulou’s ridiculous 118-109 score opened the door for a full dismissal of Alvarez’s well-earned decision over a legitimate Top Three opponent. The other judges’ scorecards: 115-112 and 116-111 were less offensive. The Boxing Tribune scored the bout 114-113 for Alvarez.