After 12 months of inactivity, James “Light Out” Toney (74-7-3, 45 KO’s) returns to the ring this Sunday when he faces undefeated Aussie Lucas Browne (15-0, 14 KO’s) in the 12 round main event at the Convention & Exhibition Centre in Melbourne, Australia. This is Toney’s first bout since stopping Bobby Gunn last April. 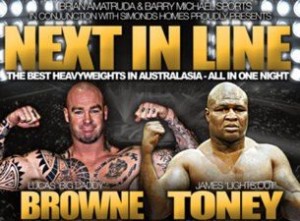 There’s not much you can say about James Toney that hasn’t already been said. The four division, multiple world title holder is nothing if not persistent. Even at 44 year old, he still feels he has enough left to win heavyweight gold from one of the Klitchko brothers, a bout he’s been talking about for years though the chances of him getting that shot are slim. He’s been written off numerous times but despite inactivity, weight issues, and steroid controversy, he fights on taking any challenger willing to fight him.

His last trip overseas was in 2011, he traveled to Moscow to meet Denis Lebedev for the interim WBA cruiserweight title. In his first drop to cruiserweight since 2003, he was thoroughly out fought by Lebedev, and lost a lopsided 120-108 decision on all three scorecards. He followed that bout with an RTD 5 win over Bobby Gunn when Gunn broke his hand and couldn’t continue. Now a year later, he travels again to his opponent’s backyard to meet Lucas Browne.

It’s hard to tell what kind of challenge Toney is getting with Lucas Browne, but he’s a terror on paper; undefeated in 15 bouts with 14 stoppages, all within five rounds. Truth be told, Australia is no boxing hot bed, and Browne’s record is littered with C level opposition and journeymen. Jason Gavern, Hastings Rasani, and Clarence Tillman are the most recognizable names on his ledger to anyone outside Australia, so taking on Toney is a huge step up even if Toney’s best years are 60 pounds and 16 years behind him.

Browne is a big, strong fighter but his skills are limited: a good jab but carries his left hand low, a solid right but throws it wide. His style fits perfectly for Toney’s defensive, counter punching style. Unless Toney shows up looking to just go through the motions, he should take this fight without much trouble.

Give Lucas Browne credit where it’s due, Toney’s no easy task and for and up and comer looking to pave a road for himself there’s easier paths he could have taken. Sunday he’ll see if it was the right path.

Johnson, once a top American prospect, is looking for a second chance at heavyweight gold after losing to Vitali Klitschko in 2009. He followed that bout with a four fight win streak, but was set back again when he lost in the finals of the U.K.’s “Prizefighter” tournament to fellow American Tor Hamer. Coming back with two more victories, he fought and lost to U.K.’s heavyweight hopeful Tyson Fury. Many felt Johnson had the style and experience to win that bout, but dropped a near shut out decision in front of Fury’s Northern Ireland fan base. Now in his first fight of 2013, he faces the OPBF and Australian heavyweight champion, Solomon Houmono.

Haumono’s lone defeat came in 2009 when he took his undefeated 16-0-1 record in against 3-0 Justin Whitehead for the lowly regarded WBF International heavyweight title. Losing a 10 round decision, he stopped Michael Kirby in the 10th round a month later. Inactive for nearly two years, he returned in late 2011 and since then has gone 3-0-1, scoring all three wins by stoppage.

Like Lucas Browne, Haumono has an impressive stoppage percentage but with the exception of Mike Tyson look-a-like Cliff Couser, he hasn’t fought anyone of note nor any fighter near the caliber of Johnson. His decent speed and a solid looping right hand may give Johnson some trouble but Johnson’s skill set should be enough to earn him the win.