Hello Earthlings and welcome to another episode of boxing’s Sunday Brunch show! This week was jam-packed with fights so let’s skip the usual formalities and jump right into the action…Grab your spaghetti squash and bust out the chimichurri sauce, this one is going to be delicious. With that being said, I gave you your instructions in the dressing room, what I say you must obey – Cuidate, escucha me, toca los manos y buena suerte…Let’s get it on! 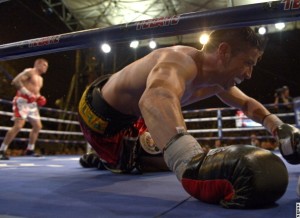 You have to hand it to Sergio Martinez. He has been consistently fighting undefeated (or nearly undefeated) young tigers for the past five years. He’s at the stage of his career now where he picks and chooses opponents, that can sometimes be a boon to an aging fighter, other times it can be a detriment.

“Maravilla” nearly learned that lesson the hard way after hand-selecting 30 year-old Martin Murry of Merseyside, United Kingdom to be his foil de jour. After the fight was pushed forward nearly two hours due to a torrential downpour in the Buenos Aires based Club Atletico Velez Sarsfield arena, Martinez was confronted with a better opponent than expected.

They sometimes call it the “silk pajama syndrome” when fighters start taking their foot off of the gas and start enjoying the fruits of all their hard work. Judging from the lack luster performance put on by Sergio on Saturday night, I’d say that he’s been spending a little more time relaxing in the sun and taking glamour shots rather than putting in the effort that got him to where he is now.

While seeing Martinez light up at the obvious adoration of all his 50,000+ fans that showed up to cheer him to victory, it became clear to me that this would not be a good showing for him. Not only was he not as physically shredded as he usually is at the pre-fight weigh-in, he didn’t seem to have the fire he normally does. I do believe that Martinez thought this would be a showcase home coming walk-over for him.

I think that his poor showing may be fortuitous, though. Before the Murry ordeal Martinez looked like a man made of iron and often looked quite Marvelous in comparison to his peers. Now that he’s been made to look ordinary, I think that a mega money match up with Money Mayweather is extremely feasible. In fact, I think that Floyd Mayweather taking on Sergio Martinez is not only probable but it could turn out to be one of the most highly valued scalps in his whole collection; a true lineal champion. I can envision Mayweather licking his chops after watching (or having one of his henchmen watch) Martinez struggle so mightily with the Brit.

I had the fight a very close and would have been fine with either a Martinez close call or a Murry win. Often times Martin Murry’s inactivity paved a way for Sergio steal rounds, even if most of his shots were ineffective. Think Manny Pacquiao vs Joshua Clottey, only with less bribery from arena owners and far less superlatives spewing from Jim Lampley and crew.

1. Mayweather needs to cap off his career with a win over Sergio Martinez. It’s doable, feasible, profitable and probable.

2. Zab “Super” Judah has really shown me that he’s finally matured as a fighter and as a person as well. He kept his composure during duress and showed the grit of a true premier world class athlete in the championship rounds.

3. Danny Garcia has three things going for him. He’s got very heavy hands, great accuracy and a genuine Puerto Rican warrior mentality. Other than those quite excellent attributes I think he’s pretty one dimensional; he lumbers along with a very average, flat-footed Margarito-esque cadence. In some ways he seems to barely have any boxing skills, however, he always seems to find a way to win, so a big congratulations is in order for his big victory over Zab.

4. In other news, James Toney got beat up again. Anyone shocked?

5. Chris Aareola lost a landslide points decision to Bermane Stiverne. I would have liked to see him square off against the future of the heavyweight division, Deontay Wilder, but I guess that’s not going to happen anytime soon. He will never reign (taco) supreme.

6. Sergio Martinez needs to keep his damn hands up. What is his deal? He isn’t Roy Jones in his prime, as a matter of fact, his ‘prime’ is fast slipping away.

7. Have I mentioned that Deontay “The Bronze Bomber” is the future of the heavyweight ranks? Not that decapitating Audley Harrison is the crowning achievement of a world champion, but it’s the most notable win on Wilder’s resume, and a good step in the right direction.

8. Amir Khan has all the hallmarks of a champion. Power in both gloves, great precision and extremely fast hands; he is, however, missing some fundamental elements that would make him nearly unstoppable.

Amir is vulnerable to overhand rights and lefts, he does not take a shot well, even with his blistering speed he’s never quite out of the danger zone. He performed several samba dances (and even hit the deck) against a man who should have had little chance at victory. Khan remains dangerous but vulnerable, a surefire recipe for a ticket seller. Khan and Mayweather would sell out any stadium in the EU.

Speaking of surefire recipes, and in honor of both Chris Arreola and James “Turn My Lights Out” Toney we will be going over an oldie but a goodie. Since these gladiators endured a harsh pounding on Saturday, I figure a good pound cake recipe will be fitting for today’s Sunday Brunch dessert. In culinary school one of my chefs told me that pound cake is the easiest recipe to remember because there’s a pound of each ingredient in it, that was a bit of hyperbole but it’s rooted in reality.

Start off with 2 c. cake flour (sifted), 2 c. white sugar, 1/2 tsp. sea salt, 2 sticks (or 8oz) of unsalted sweet cream butter, 5 eggs, 1 c. whole milk, 1 tsp. of vanilla paste (or extract) and the zest (using a microplane) of one whole lemon. To properly grease your pan (be it bundt or loaf) apply cooking spray, butter or a paper towel with some vegetable oil and lubricate the inside of the pan. Lightly dust said pan with flour and shake to evenly coat. With a hand mixer, cream together the butter and sugar, after product is light and fluffy add eggs one at a time. Fold dry ingredients in with a spatula alternating with the milk but ending with the flour. Add your flavorings last (vanilla and lemon). Bake in a pre-heated oven at 350 F for one hour or until a tooth pick comes out clean.

I hope you’ve enjoyed my random amalgamation of words this Sunday and I look forward to next week so we can share more great recipes, tips and tricks…Oh, and boxing talk! Remember to always brush your teeth and don’t forget to floss, another Sunday Brunch is forthcoming. Stay hungry, family. Sante.