This Saturday, May 4, pound-for-pound kingpin, Floyd Mayweather (43-0, 26 KOs) takes on four-division champ, Robert Guerrero (31-1-1, 18 KOs) at the MGM Grand in Las Vegas in a Showtime pay-per-view event. Can the eager, motivated 30-year-old Guerrero give 36-year-old 5-division world champ, Mayweather, the first loss of his career?

The Boxing Tribune staff gives their take on the big fight: 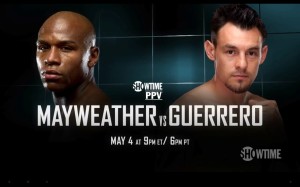 Despite the pre-fight spin, Robert Guerrero is by no means a choir boy. Guerrero is a dirty fighter who can make things infinitely ugly if/when he finds himself falling behind in a bout. I see this one being an absolute mess early on with Guerrero trying to hold with one arm and punch with the other while Mayweather tries to push off with the forearm to get some space. I wouldn’t be surprised if one or both fighters get cut. A lot will come down to how well referee Robert Byrd officiates the bout. If he’s strict, it will benefit Mayweather. If he’s lenient, he could very well be laying the groundwork for the upset of the decade. Assuming “down the middle” honesty from Byrd, if the bout goes past seven rounds without a DQ or cuts stoppage, Mayweather will figure out the reachy-grabby style of Guerrero and start to pull away. By the championship rounds, Guerrero will be winded and emotionally spent. My pick is Mayweather via UD, possibly 117-111 or 116-112.

It was obvious in the Cotto bout that Mayweather’s slowing down, and with a guy like Guerrero that can mean more trouble than most are expecting. Outside the ring distractions aside, Guerrero has the tools to make this a close one. An aggressive southpaw, his approach will be much like Miguel Cotto’s was, and to keep Floyd backing up, knowing his legs aren’t what they used to be. Even slower afoot though, a 36 year old Mayweather is still a step above everyone else. The Ghost will have his moments, and it will be fun to watch, but Floyd’s edge in speed and defense will make the difference as it always has, and he’ll win by a comfortable unanimous decision.

The key aspects of this fight is what impact if any Mayweathers inactivity and age will have upon him. Will he be that little bit slower than before, are the reflexes going to be just a touch out of time. Mayweather has always preserved his ability with his dedication to keeping in shape, despite not being the most active of boxers in recent years. But even with his strict training regime, one day his age will start to tell upon him and he will start to slow. There were some signs in his last fight against Miguel Cotto that Mayweather is already starting to slow down, as he seemed to mix it up a lot more than he would have normally. Whether his performance against Cotto was more a case of Mayweather wanting to entertain the crowd, than actual early evidence of a decline, we will perhaps know after Saturday. If Mayweather is anything near his best however, Guerrero could be in for a painful night. He is simply too slow and too limited a fighter to seriously trouble Floyd. If he tries to box Floyd he will be jabbed to bits, if he tries to get Floyd on the ropes and fight him on the inside then Floyds counters will dismantle him. I think Guerrero’s only chance is to jump on Floyd early and try to do some damage in the early rounds before Floyd has got his rhythm going. I see Roberts toughness giving him some good early moments, before Floyd takes control by about the midway, and stops a battered and bloody Guerrero in the 10th or 11th round.

Guerrero will have his moments early on, and I wouldn’t be surprised to see him leading early on. But once Mayweather finds the rhythm and starts snapping his head back with right hands he’ll separate himself and Guerrero will slow to a grinding halt. He’ll see the final bell and his biggest payday, but not much else. Mayweather UD.

When you analyze the perceived best fighter of a generation who is now 36 years of age it is usually not about what their opponent brings to the table, but how they are going to deal with having diminished reflexes. Robert Guerrero leads with his head in a way that would make Victor Ortiz and the 2011 version of Timothy Bradley blush – he’s going to use all available tools (including elbows, headbutts and shoulders) to make this a rough and bloody fight, however, I see this one going to the cards. Robert is often open to the body and if Floyd is so inclined I can envision a scenario where he lands at will to the body of the Mexican-American. Floyd Mayweather by close, but badly bruised UD.