Hello friends and welcome to another action packed edition of boxing’s Sunday Brunch. In this episode we are celebrating the sweet science. Boxing has a few key practitioners that really epitomize and exemplify what it really means to be a boxer. I’m going to keep the introductions short this week so we can jump right into the fray so grab some Coronas and hold on to your chimichangas, this one is going to be delectable. With that being said, I gave you your instructions in the dressing room, what I say you must obey – Cuidate, escucha me, toca los manos y buena suerte…Let’s get it on! 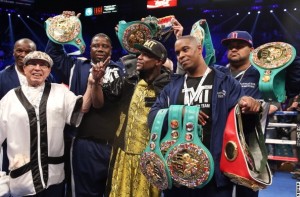 On Saturday night, from the MGM Grand Garden Arena in Las Vegas, Nevada, Floyd Mayweather completely dominated the rugged Mexican-American, Robert Guerrero. With unanimous scores of 117-111 (I had it a bit wider), Mayweather painted a fascinating opus and illustrated to boxing fans and media alike that his genius, reflexes and skills have not diminished in the least.

The legendary and immortal Benard Hopkins in a pre-fight interview pontificated on the subject of age: “We all lose something every year, Floyd Mayweather is just better at hiding it than most.” This may be true, I think in Floyd’s case perhaps the intangibles that he has forfeit were his immaturity and temper.

We’ve all seen Floyd react to negative blather in the past, this time we saw a more mature level-headed man. When Robert Guerrero’s father, Ruben Guerrero, went on tirades during the press conference about Floyd being a woman beater, Mayweather took the high road and ignored him. When Ruben tried to get Mayweather off his game by yelling at Floyd Sr. while the two fighters were being given their final instructions by referee Robert Byrd, Floyd kept his poise and remained concentrated.

Any questions that were asked about the change-up in style from his last fight were answered in emphatic style. Many pointed to Floyd’s grueling toe-to-toe trench battle with the Caguas Crusher, Miguel Cotto, last May as a sign of Mayweather’s decline. He fought flat footed because he has aged, they would say, he has lost a step so he had no choice but to stand in the pocket. Many of those same detractors will now say that Mayweather was running from Guerrero, much like some did in the other master boxing clinic this year when Cuban defector Guillermo Rigondeaux absolutely shut out the Filipino Flash, Nonito Donaire.

Watching Mayweather systematically break down an opponent that many felt would be too durable and solid for the 36 year-old champion was an absorbing study in the sweet science. Floyd’s foot work, lateral movement, power and precision were all on display, a truly vintage exhibition by the pound-for-pound best fighter in the sport.

While numbers don’t always tell an accurate tale of the action, Floyd Mayweather’s punch statistics were astonishing to put it mildly. Mayweather threw nearly one hundred less punches than Robert Guerrero but landed almost one hundred more. When it came to throwing the more damaging shots of the night, Floyd Mayweather crashed home almost twice the number of connected blows – an almost unheard of 60%.

Once in a generation a talent will come along that constantly reinvents itself, that perpetually defies all logic and exceeds expectations in nearly every way. Men that are capable of extraordinary feats, that have a drive to push themselves to not only become the best of their peers, but to be the best of a generation and to be remembered in the annals of history. Robinson, Dempsey, Louis, Marciano, Liston, Tyson – Mayweather.

1. Adrien “What’s The Problem With My Shapes, Dog” Broner and Paulie Malignaggi had a fun war of words this weekend, I will be looking forward to this fight. If it’s half as entertaining as their pre-fight banter we’re all in for a treat come June 22.

2. Broner needs to drop a few pounds, though. As Malignaggi pointed out, he looks like he could challenge for a middleweight title at this point in time. Shapes.

3. I have said this before and I will repeat myself again, Floyd Mayweather should include the scalp of Sergio Martinez in his collection before he finally pulls the curtains on his career.

4. Looking ahead to Mayweather’s possible future opponents I see only a few names coming up in my crystal ball: Amir Khan, Brandon Rios or Mile High Mike Alvarado, the aforementioned Argentinian, Danny Garcia, Paulie Malignaggi or Adrien Broner, Tim Bradley, Devon Alexander and last but not least, I do think a clash with Manny Pacquiao is still possible for Mayweather.

5. Notice I did not mention Canelo Alvarez. Floyd has said that the Mexican is a possible opponent but in reality this is a man who balloons up over 170 pounds come fight night, unless there is a rehydration clause in the contract I foresee Mayweather taking on people in his own division rather than the middleweights of the world.

6. Five more and he’s done ladies and gentlemen, let’s appreciate him while he’s here. I think the best is yet to come for Mayweather, he is truly the Ali of our generation.

In honor of the official May Day holiday I’m going to whip up a Mexican inspired dish for you to reproduce in the comfort of your own home. This one is fun to make, super easy and quite delicious – puffy tacos. You will need: Flour tortillas, crumbled Cotija cheese, shredded lettuce, fresh cilantro, finely dice white onion, diced tomato (I use Roma), Mexican crema (or sour cream if you don’t have a Mexican grocery near you), refried beans, chili beans, ground beef (Morning Star crumbles are a suitable substitution if you’re vegetarian) and limes.

Start off by browning your ground beef (or vegetarian substitute) in a skillet, use vegetable oil and add a pinch of salt, black pepper (or white if you want it a bit more spicy), some ground cumin and smoked paprika. Once the meat is cooked and delicious (taste at every step of the way!) set aside on paper towels to drain some excess fat off. In the same pan sautee some of your diced onions until translucent, season with salt and pepper and add tomatoes. Cook for a further 3 minutes or so to infuse the flavors, add refried beans and chili beans in a ratio of 2:1. Taste and adjust for seasoning. At this point some chicken bullion can be added for additional flavor. Once you’ve got the flavor that makes you happy set aside.

Take some more of your diced white onions and soak in cold water for five minutes to remove all bitterness and sharpness, strain and drain. Take some of your fresh diced tomato, cilantro, onion and lettuce and arrange on a plate or bowl. Place the Mexican crema in a small bowl, do the same with the Cotija cheese.

For the tacos, place some vegetable oil in a deep sided pan, wok or Dutch oven and bring to temp. One by one place the flour tortillas in the hot oil, they will puff up almost instantly, flip to brown on both sides. Remove and drain on paper towels.

Slice the puffy tortillas open and you can build your puffy tacos in any order you like! I suggest meat, crema, beans, lettuce, cilantro, cheese, onion and finally tomato. Squeeze some fresh lime juice on top and you’re all ready to have a Cinco de Mayo feast!

I hope you’ve enjoyed my random amalgamation of words this Sunday and I look forward to next week so we can share more great recipes, tips and tricks…Oh, and boxing talk! Remember to always brush your teeth and don’t forget to floss, another Sunday Brunch is forthcoming. Stay hungry, family. Sante.