Hello family and welcome to another episode of boxing’s Sunday Brunch. This week we’re taking a peek at the fallaciously glamorized life of Adrien Broner and how he is trying to parlay his success off of Floyd Mayweather’s. We’re all about the billions this Sunday so without further ado grab your Paydays™ and hold on to your stripper glitter, we’re about to take a giant swig off a magnum size bottle of Veuve Clicquot. With that being said, I gave you your instructions in the dressing room, what I say you must obey – Cuidate, escucha me, toca los manos y buena suerte…Let’s get it on! 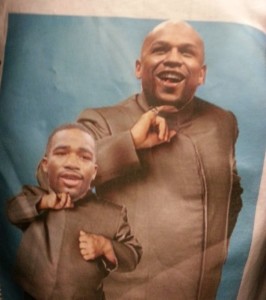 Or so goes the intro to Adrien Broner’s attempt at a biopic (or something to that effect, honestly it was difficult to watch). Much like Broner’s role model Floyd Mayweather had 24/7 and now has All Access documentaries that take a glimpse into the life of a super star, Adrien Broner now has his very own imitation curiously titled “About Billions”. Broner’s hardly watched vignette comes off as a weak attempt to copy yet another thing from his so-called big brother.

The self proclaimed “king of Las Vegas” has a thing or twenty to learn about entertaining an audience on an international level. Sure, some of his fights have been exciting, the guy is athletic and he can fight – at least he can fight the limited opposition he’s been fed thus far. In Broner’s stiffest test he was awarded a gift decision against Daniel Ponce De Leon, a fight where some had him losing by a few points.

Adrien Broner takes every opportunity in his mini-documentary (and in media interviews) to piggy back off of Floyd Mayweather’s name and success. AB even goes down to the Mayweather Boxing Club to pose by a few of Mayweather’s cars and take pictures with the pound for pound champion’s fans.

Let me just say that there is absolutely nothing wrong with looking up to someone who is successful. There is nothing at all wrong with having a role model and there is certainly nothing bad about having goals and aspirations. What I find bothersome about Broner is his copycat mentality. He ISN’T Floyd Mayweather, that’s the problem with The Problem. He is Adrien Broner, an upstart talent who thinks that all he has to do is walk, talk, quote and pretend to be Floyd Mayweather and then he will be Floyd Mayweather.

When Mayweather was Broner’s age he had already defeated hall of famer Genaro Hernandez, cult favorite Emanuel Augustus and was preparing to meet (and stop) the great Diego Corrales. The 23 year-old version of Floyd Mayweather was humble, hard working and very grateful – not at all the entitled attitude of Billions Broner.

Maybe the best thing that can happen to the counterfeit Floyd Mayweather at this early stage of his career is to lose to Paulie Malignaggi. Don’t get me wrong, I don’t think that is going to happen when the two biggest mouths in professional boxing clash on June 22, I just think that a humbling moment would serve the two division champion well in the long run.

Piggy backing off of Floyd Mayweather’s name can only get you so far, eventually Broner will have to stand on his own two feet and step out of Floyd’s shadow. My advice is two fold: surround yourself with positive people and ditch the money groupies and ‘yes men’. Humble yourself, you’ll endure yourself to the general fans of boxing infinitely more that way…you can take that to the bank.

1. Trust me when I say don’t watch “About Billions”. You’ll come away with a wicked headache and a disgusting taste in your mouth. I suffer so you don’t have to.

2. Vic Darchinyan might be lining himself up for a shot at getting dismantled in glorious fashion by the super bantamweight kingpin, Guillermo Rigondeaux. Darchinyan was always fun to watch and I wish him continued success on his road back.

3. Does losing a big fight in the Top Rank stable place you in line for a mega fight with Manny Pacquiao, or are the rumors about Mile High Mike Alvarado’s hand problems true? I think it’s a bit of both.

4. Matthysse and Peterson is going to be a cracking fight, as Teddy Atlas would say “don’t get up and go to the bathroom” this one is going to be fun!

5. It seems that the future of the heavyweight division, Deontay Wilder, may just get a shot at at the lineal king of the big men yet. I’m predicting a massive upset (if the Bronze Bomber can get a few more solid wins under his belt before that time).

6. Vernon Paris looked like he was playing Wii Boxing stoned as can be in his unconvincing victory over Manuel Perez this past Friday…Maybe he should give up boxing and go back to living the high life.

In honor of Mayweather lite (about billions Broner), this week we’re going to be cooking up something low-fat off of my special dollar menu…Some low calorie piña colada gelato! What you will need: 8 oz. shredded coconut, 1 1/2 C. milk plus a 1/4 C. extra (whole or 2%), 1 tsp. vanilla paste (or extract), two ripe bananas, 1/4 C. raisins (steeped in just enough warm milk to cover, about 10 minutes), 1/4 tsp. ground cinnamon, 1 C. ice and 1/2 a can of pineapple chunks in their own juice.

Method: Place shredded coconut in your blender and cover with the cup and a half of milk, allow to sit for ten minutes. Meanwhile, take your steeped raisins and drain from the warm milk, allow to cool and discard the used milk. Slice bananas into small pieces and cut pineapple chunks into quarter inch dice. Place bananas in your blender with the soaked coconut milk mixture, add 5 tablespoons of the pineapple juice (from the can), the vanilla and finally the cinnamon – Blitz.

Once a homogeneous consistency is achieved (you may add xanthan gum at this time, it will further inhibit ice crystallization, but it is not absolutely necessary), add in your pre-steeped raisins and diced pineapples. Add entire mixture to your ice cream machine and set a timer for twenty minutes. Once the gelato is finished it will have the consistency of soft-serve ice cream, if you place it in your freezer it will behave more standard ice cream but since you used milk instead of cream it will have less than half the calories!

Thanks for tuning in this again this week boxing fans, I hope you’ve enjoyed my random amalgamation of words this Sunday and I look forward to next week so we can share more great recipes, tips and tricks…Oh, and boxing talk! Remember to always brush your teeth and don’t forget to floss, another Sunday Brunch is forthcoming. Sante.