“À bois nouex, hache affilée” is an old French saying, translating into what anglophones know as “an eye for an eye,” or “treating roughness with roughness.”

Last Saturday at the Buffalo Run Casino in Miami, OK, Dierry Jean did just that. 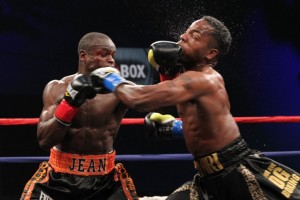 Against Los Angeles native Cleotis “Mookie” Pendarvis in a 140 lb. IBF eliminator live on Showtime, things indeed got rough for Dierry. In the third round, Jean suffered a nasty cut over his right eye that came as a result of an accidental head-butt. Between rounds, cut-man Bob Miller worked on the gaping wound as Dierry took instruction from trainer Mike Moffa.

Had the fight been stopped before the conclusion of four rounds, it would have been ruled a no-contest—but Dierry took matters into his own hands the following round to prevent that from happening. A massive looping right to the chin of Pendarvis floored the Californian, who miraculously beat referee Gary Ritter’s count. On shaky legs though, what Mookie couldn’t beat, was the barrage of punches Jean soon unloaded on him…forcing a stoppage at 2:01 of round four.

“It was a very big win,” said Camille Estephan, Jean’s manager, to The Boxing Tribune on Monday.

“I believe Mike Moffa is one of the best trainers in the world, not just in this area,” noting the sharp advice from Jean’s corner between rounds three and four. “When Dierry got cut, he said, ‘I don’t want to take risks, I want you to take him out.’ He definitely knows how to get the best out of his guy. I’m very proud of Dierry, and we’re all very happy.”

The TKO victory was an important one for Team Jean, as it guaranteed Dierry a shot at the IBF’s 140 lb. belt, which is currently held by Washington DC’s Lamont Peterson. Peterson faces Argentinean assassin Lucas Matthysse Saturday night in a non-title affair. With this weekend’s fight being contested a pound over the Jr. Welterweight limit, the strap not at stake, Dierry Jean’s sole focus is on Lamont Peterson.

“We’re going to sit down and plan,” continued Estephan. “Peterson is a very good fighter, but he better be ready for Dierry.”