On Saturday Sugar Shane Mosley (46-8-1, 39 KOs) will tread the well-worn path of so many boxers of the past, when he steps into the ring against young Mexican Pablo Cesar Cano (26-2-1, 20 KOs) at the Grand Oasis Resort, Cancun, Mexico. It is a path well-trod already for Mosley, as his recent career has become a series of comebacks following defeats, having gone 2-4-1 in his last seven bouts, stretching back to 2007 and his defeat by Miguel Cotto. 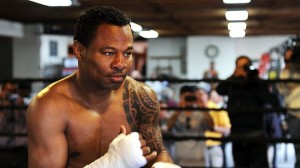 Sugar Shane’s latest comeback follows a brief official retirement last year, after his brave, but losing effort against Saul Alvarez for the WBC World Light-Middleweight title seemed to have convinced Mosley that it was time to say goodbye to the ring. However, like so many before him, Mosley cannot resist the lure of the adrenaline rush that boxers can only experience when they are fighting. Mosley has said that his aim is to be a World Champion once more and that he has been inspired by the title winning exploits of the 48 year old Bernard Hopkins. On the surface, this is an intriguing match between the old-stager and ex-champion, against a young and hungry contender. Yet beneath the surface, which tells us that this may be an interesting and entertaining fight, there is a sadness in seeing Mosley trying to reignite his career against a young gun, who says he will try to be the first man to stop Sugar Shane. Boxing is a tough and unsentimental business, especially when you are 41 years of age and haven’t won a fight in over four years and four fights.

When he first decided to return to the ring Mosley tried to secure a title fight with Paul Malignaggi for the New Yorker’s WBA World Welterweight championship. At one point, the fight seemed to be all signed and ready, before falling through amid much acrimony. Having been left out in the cold and thwarted in his attempts to fight Malignaggi, Sugar Shane has instead lined up Paulie’s most recent opponent Pablo Cesar Cano. In his title effort against Malignaggi, last October, Cano gave Paulie all the trouble he could handle, including an 11th round knockdown, before losing on a controversial split decision. Although, still only 23 years old, Cano, who turned professional at 16, has had a tough schooling in the boxing ring. His only other defeat came against the legendary Eric Morales, when he was stopped in the 10th in a contest for the vacant WBC World Light-Welterweight. Cano had been doing well against Morales, despite his relative youth and inexperience at the top level, before severe cuts caused the fight to be stopped in the 10th round in favour of Morales. Cano is a typical Mexican fighter, who while not particularly outstanding in any areas, is extremely tough and at just 23 years of age, is still improving.

One thing, which is common to see in faded fighters, is the belief that they are as good as they have ever been, even when their recent results are proving otherwise. Mosley has been saying in the run up to this fight that he is feeling better than he has done for years and will be the Sugar Shane of past. In his attempt to recapture the sparkle of his past, Sugar Shane will have his father Jack in his corner for the first time since 2008 after a series of arguments left the two unable to work together for a time. Mosley is adamant that he is embarking upon a new start and new phase of his career, which will lead him to another world championship at 40 plus years of age, although all the evidence of his recent career indicates otherwise.

Mosley is 0-3-1 in his last four fights and hasn’t looked consistently good in a fight since he beat Antonio Margarito in 2009. It is perhaps telling that Mosley has not won a fight since beating Margarito, with losses to Manny Pacquiao, Floyd Mayweather and most recently Saul Alvarez all adding up to a steady slide down from the ranks of the elite for Mosley. While Mosley would argue, with some justification, that he has been losing to the top pound-for-pound fighters in the world; the reality is that he hasn’t just been losing, but has lost one-sidedly and in doing so, produced little of the form which made him one of the best boxers in the world pound-for-pound in his prime. Increasingly, in recent fights, Sugar Shane has showed the sluggish reactions and plodding gait of the shot and aged fighter, the speed and reflexes have gone, and the once nimble legs are flat-footed.

As with many former greats, Mosley can still give tantalizing glimpses of the skills that he once had. These depleted sparkles, along with his heart and guile, have helped him survive the distance in his recent fights, but have not been enough to make him competitive. Unfortunately, like so many other faded boxers, Sugar Shane carries on with the hope that he can somehow fire up his eroded skills into what they were in his prime. Although the fight on Saturday is only for the largely meaningless WBC International Welterweight title, it is a huge fight for both men.

For Mosley to take on Cano in Cancun, he is really stepping into the lion’s den in many ways, but this fight is what he needed to take in order to try to get himself back into world-class contention. Victory over Cano would give Mosley some form of justification to say that he is still a relevant fighter at world level, while a loss would really remove him from any realistic world title aspirations in the foreseeable future. If Cano can beat Mosley, he would confirm his status as a genuine top contender. At this late stage of his career, Mosley’s name would still be an impressive notch on Cano’s resume.

The winner of this fight could well face the winner of the Paulie Malignaggi vs. Adrian Broner fight. Mosley especially would be in a far better bargaining position if he is able to get past Cano and score his first victory in four years. This fight will tell us whether Mosley has anything left competitively as a boxer at world level, or if he is only able to simply survive against the top fighters now. Cano is without a doubt the kind of fighter that Mosley should be able to beat, yet he is also a fighter that could give Mosley a painful night if Shane goes into the ring and finds himself running on empty. It remains to be seen what the punishing fight with Saul Alvarez may have taken out of the already depleted Mosley.

If Shane can drag out enough of his old speed and skills, then he should be able to beat Cano, probably on a close and hard fought point’s verdict. If however, he loses, then you would think that would be the end of the road for Mosley, but then again, boxers are always the last ones to admit when they’ve reached the end of their fistic journey. Cano has said that he wants to be the first man to stop Sugar Shane and the sad thing is, that it may take such a defeat at the hands of a fighter such as Cano, to finally end Shane Mosley’s glittering career.