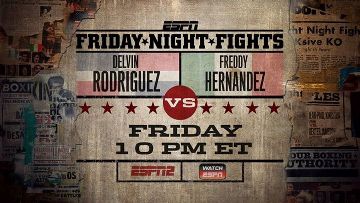 Delvin Rodriguez is a Friday Night Fights regular, having made several appearances throughout his career. A split draw in a Fight of the Year candidate with Pawel Wolak, in which Rodriguez gave Wolak a grotesquely swollen eye, was followed up by a less thrilling return match five months later. In the rematch, Rodriguez boxed more carefully, as he’s prone to do, and scored a near-shutout decision win. For his efforts, Rodriguez was awarded a world title shot against then-WBA world titlist Austin Trout. Rodriguez came up woefully short, and was slapped around for twelve rounds. After eight months off and some time in the broadcast booth, Rodriguez made his return against Oklahoma club fighter George “Comanche Boy” Tahdooahnippah. Rodriguez looked great in battering the phoenteically-challenging Comanche, who was unable to get inside of Rodriguez’s longer, harder shots.

Hernandez is a fighter on the downside of his career. Wins over Jesus Soto Karass, Carson Jones, Ben Tackie, and DeMarcus Corley earlier in his career have been overshadowed by losses against the upper echelon of his division. Since a first-round TKO loss to Andre Berto in 2010, Hernandez has fought only once per year. He beat former welterweight titlist Luis Colazzo in 2011 before dropping back-to-back decisions to Erislandy Lara and Demetrius Andrade in 2012 and 2013, respectively. This is a win-or-go-home type of fight for Hernandez.

Neither Rodriguez nor Hernandez can consistently be classified as a come forward action fighter. Aside from his 2011 classic with Pawel Wolak, Rodriguez is a guy who makes his living trying to establish himself on the outside. While he prefers to fight from the outside, he can be drawn into slugfests if he isn’t allowed to pivot out of corners and off the ropes. Hernandez is also a guy who doesn’t often look to get inside and mix it up. He’s tall and he’s got good reach, with a straight right hand that packs a bit of a punch when he’s able to line his opponent up. Rodriguez is a similar fighter and can be classified as right-hand heavy. His jab is above average and his left hook isn’t anything to write home about.

Both guys have fought a good level of competition, and have come up short nearly every time. Rodriguez, who has been on the wrong end of some bad decisions throughout his career (Isaac Hlatshwayo in 2008, Rafal Jackiewicz in 2009, and Ashley Theophane in 2010), is 33 years of age and looks to have more upside.

This fight should play out with both guys trying to outsmart the other on the outside. Hernandez will look better in the early rounds, with reach advantage keeping Rodriguez at an uncomfortable range. But with little head movement and a style that lends itself heavily to timing, Rodriguez will pick up on that and start landing his own punches when he’s able to get into his own comfortable range. Rodriguez should win a close decision in what has become his adopted hometown, and be back on Friday Night Fights again in the future.

The co-feature may struggle to keep your attention, with two young and unproven prospects who lack power looking to take another small step forward. Cincinnati native Chris Howard, who fought on the undercard of Rodriguez’s last Friday Night Fights appearance, has two losses two unbeaten prospects on his ledger. After dropping back-to-back split decisions to Arash Usmanee and Mark Salser in 2012, Howard bounced back with a third-round stoppage win over Bayan Jargal in February. Not known for his power, Howard’s knockout of Jargal was a thing of momentary beauty. After fighting timidly against an aggressive Jargal, Howard froze him with a short jab before putting him down with a straight right hand in the third round.

Issouf Kinda has gone between six and eight-round fights over the last two years, with the highlight of his career being a shutout victory over journeyman Mike Arnaoutis last October. The 25-year-old New York resident last fought in February, scoring a KO2 win over Javier Loya.

Friday Night Fights airs live on ESPN2 at 9 PM ET/6 PM PT. The Boxing Tribune will have a recap of the televised fights, including any swing fights following the broadcast.

You can email Tim at timharrison65@gmail.com, or send him inching towards 1,100 Twitter followers by following him at www.twitter.com/TheTimHarrison.