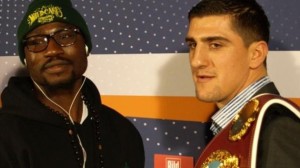 Huck has held the WBO cruiserweight title since late 2009, when he scored a comfortable decision win over Victor Ramirez to take the belt. After successfully defending the belt against Afolabi for the first time, he went on to beat the likes of Brian Minto, Matt Godfrey, Denis Lebedev, Hugo Garay, before taking a short trip north to meet Alexander Povetkin for the WBA heavyweight crown. A tough bout for both fighters, Huck would drop a majority decision, though many felt he deserved to win.

The Povetkin loss was followed by second defense against Afolabi. Afolabi did well in the early rounds, using his reach to control the bout and score from the outside, but by the midway point of the match, Huck closed the distance and became more aggressive. He landed some heavy shots on the challenger and closed out the fight in strong fashion. The end result was a majority draw, which many disputed. Some felt Afolabi had done enough in the early rounds to secure the decision, while others favored Hucks more damaging punches, and saw that as reason enough for the champion to be declared the winner. Officials at the WBO also didn’t sit comfortably with the result either, and mandated the third meeting.

The London born Afolabi is a former NABO and Inter-Continental cruiserweight title holder. A professional for 11 years, he’s lost only twice: once to Huck and to then up-and-comer Allan Green early in his career. He’s racked up some solid victories along the way; he’s taken out Orlin Norris, Eric Fields, Enzo Maccarinelli, and Valery Brudov to name a few with his last bout being the battle with Huck which was just over a year ago.

Stating the obvious, Afolabi’s best shot to win this is to establish the distance, and keep that jab working. He’s a crafty boxer, but Huck’s aggressive and the harder puncher. He appeared to have Afolabi in trouble on a few occasions during the second fight so with that in mind; we may see Huck come out to a faster start than he did previously. Also in Afolabi’s favor is the fact that Huck had a tough year in 2012. Three draining 12 round bouts with Povetkin, Afolabi, and most recently Firat Arslan seven months ago may have very well sapped the defending champ. That could be the deciding factor, and despite his inactivity over the last year, give Afolabi enough of an edge to snatch the title.