James Degale (15-1, 10 KOs) defends his Silver WBC Super-Middleweight title against Croatian, Stjepan Bozic (26-6, 17 KOs) on Saturday with his sights set on challenging for a World title in the near future. However, despite having his eye upon World Championship glory, the truth is that Degale’s career has failed to turn out in quite the way he would have envisaged, when he turned pro as England’s Golden boy in after winning Olympic Gold at the 2008 Beijing Games. Although Degale has already held the British and European Super-Middleweight titles, along with some other less traditional baubles, there is a lingering sense of underachievement drifting around his professional career. 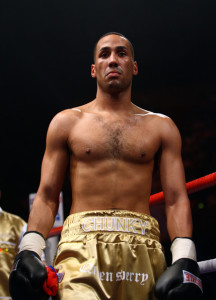 Since turning pro four years ago, Degale has had just one defeat, so far, a close points loss to bitter domestic rival George Groves, but it was a reverse that has had a defining effect upon his career to date. While the fight was close and indeed, in many people’s eyes, could have gone either way, Degale suffered a backlash after a build up in which he had made some unsavoury remarks about Groves and what he would do to him. The former golden boy was not the first boxer to find out the consequences of failing to back up his pre-fight boasts and insults. Boxing fans tend to be forgiving, about even the most ludicrous pre-flight talk, providing you show that you can walk the walk, in the ring.

It is telling that ’Chunky’ is defending his Silver title at The Glow, in Kent, which is to be quite honest, hardly a boxing hot bed, rather than in a London venue. In fact, Degale has not fought in London since his defeat to Groves, while Groves himself has fought on four high profile London bills since his victory over ’Chunky’.

Ever since he turned professional, Degale has had a mixed relationship with the boxing public, with his self-assured nature, striking many as arrogant. This perception of Degale‘s personality, along with his counterpunching southpaw style, perceived by some as unexciting, has led to him having a fractious relationship with the fans.

As a result, Degale has found himself very much on the outside, looking in from the cold. Recently, when Carl Froch unified the IBF and WBA World Super-Middleweight titles, there was much talk about Froch’s next opponent in the aftermath, with the names of George Groves, Nathan Cleverly and Bernard Hopkins heavily mentioned, little, if any discussion regarding Degale meeting Froch in a big domestic showdown. In fact, the only person who seemed to be talking about Degale fighting Froch was Degale himself. Despite this apathy, surrounding him ‘Chunky’ has worked his way steadily up the rankings since his loss to Groves, winning and then vacating the European title, and now concentrating on the WBC Silver Super-Middleweight title. Although the Silver title itself is yet another rather spurious belt, in an age which has seen the rise of various International, Silver, Bronze, Junior and Interim titles of bewildering numbers and importance, the belt basically means that Degale has a guaranteed high world ranking, providing he can hold onto it.

Saturday’s defense against Bozic will be ‘Chunkys’ second fight in just three weeks, in a burst of activity which is aimed at keeping Degale in the spotlight, with the hope that this may help gain him a shot at the world title in the not so distant future to come.

In his last fight, Degale travelled to The Hilton Lac Leamy, in Quebec, Canada, where he dispatched Sebastian Demers in 2 rounds. Saturday’s fight with Bozic is expected to be a tougher assignment for ’Chunky’ but, he is still an overwhelming favourite to win, and retain his Silver belt and his all important world ranking.

Bozic is the kind of fighter whom Degale will want to look good against in victory, with defeat an unthinkable improbability that would spell disaster. Bozic is a decent European class boxer, who has fallen short every time he has stepped up to world level. The biggest fight of his career came in late 2009 when he fought Dimitri Sartison for the vacant WBA World Super-Middleweight Championship, a fight that he lost when he was stopped in the 6th round, due to a shut left eye. Bozic’s next flirtation with world class came in 2011 when he tangled with the formidable Arthur Abraham, a former World Champion at both Middleweight and Super-Middleweight, and had to retire after 2 rounds with a damaged left hand.

Degale finds himself in danger of a no-win situation against Bozic, needing to win impressively in order to build up the momentum he needs at what is a crucial point of his boxing career. There is little doubt that ’Chunky’ is a talented boxer, with good technical skills and a underrated punch, and indeed, if he has a glaring flaw at the moment, it is a tendency to neglect his boxing skills and trade punches, rather than be over cautious, as he was accused of being earlier his career. Yet, Degale still struggles to provoke much interest amongst the average boxing fans. It seems almost cruelly ironic that ‘Chunky’ is defending his ‘Silver’ WBC Belt on Saturday, as his professional career so far has fallen short of the golden success which it promised at the beginning. Part of the problem maybe that we expect too much too soon from boxers who have won Gold at the Olympic Games. The inevitable fanfare and deluge of money, which accompanies their turning professional often, gives way to a wicked backlash when they fail to perform as perfectly as hoped from the beginning.

The chances are that Degale will only find the sort of acceptance and respect that he craves, when and if, he becomes successful at world title level. That being the case, this weekend’s fight against Stjepan Bozic will simply be a marking time fight for ‘Chunky’ and keep him busy for a little while as he waits his chance to prove himself in a much bigger fight in the future.

However, at the moment, Degale is trapped in the boxing equivalent of the catch-22; Carl Froch and George Groves (who has shown little interest in a rematch with Degale) see him as a high risk and low reward opponent. The truth is that he will probably have to rely on the world boxing bodies to force him through to a World title shot with their rankings, rather than being given a shot voluntarily. Until then, Degale must keep winning and trying to impress, defending silver when he would much rather it was gold.