This Friday at Little Creek Casino Resort in Shelton, Washington, ESPN2’s Friday Night Fights will feature hard-hitting lightweight, John Molina (25-2, 20 KOs) in his second bout back after an embarrassingly short 44 second TKO at the hands of then-WBC 135 lb. champ, Antonio DeMarco. Molina will be taking on undefeated Russian Andrey Klimov (15-0, 8 KOs) in a 10-round lightweight contest. 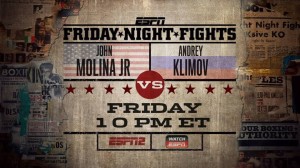 A lot has changed in the lightweight division since Molina’s heartbreaking loss to DeMarco back in September of last year. Most notably, Adrien Broner would go on destroy DeMarco to take the WBC title before removing himself from the division in pursuit of a welterweight title fight against Paulie Malignaggi. Also, former bully of the division, Brandon Rios finally gave up efforts to make 135 in favor of a run in the junior welterweight division.

The two high-profile vacancies at the top of the lightweight food chain have created a real opportunity for Molina to step in and win a main stage spot that he normally may not have been able to claim. Needless to say, continued victories are a must for the tough fighter from Covina, California.

Molina’s opponent, Klimov is a relatively unknown entity with a slim resume, but a couple of regional alphabet titles already on his career ledger. The Russian lightweight champ is an eager combatant, but can also be a clumsy, back-peddling counter puncher. He will come into Friday’s contest with a huge disadvantage in both punching power and physical strength.

North Carolina’s Hanshaw, who has faced fighters such as Roy Jones Jr., Andre Dirrell, and Jean Paul Mendy, is three fights removed from a four-year stretch of inactivity. Philadelphia’s Ennis, on the other hand, has been the more active fighter, but has nowhere near the resume of his rival.