Hello team and welcome to a belated edition of boxing’s favorite Sunday Brunch (tentatively titled today as the Tuesday Meal Ticket). Today we’re chopping up most of the big fights from over the weekend; from Maidana’s big win, Lara’s stoppage of the tough Perro Angulo and other delectable random musings and insights. This episode is the double rainbow that shone above the sacred Baekdu Mountain when the North Korean supreme leader was born, so grab a crate of forbidden goat’s milk and take out the entrenching tools, this one is only going to get better with age. OK, I gave you your instructions in the dressing room, what I say you must obey – Cuidate, escucha me, toca los manos y buena suerte…Let’s get it on! 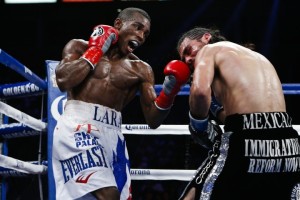 We had some great fights over the weekend (and a lot of baseball if you’re a Friday Night Fights fan), Most of the favorites secured victories, a dramatic upset, a few knockouts and even a disfigurement were on tap so without further ado, let’s jump straight in the fray.

When I look at Erislandy Lara I see someone with fantastic talent but a few glaring vulnerabilities that might keep him from the very apex of the sport. Lara bounced back well after touching the canvas and overcame a large weight differential between himself and Angulo to earn a stoppage on Saturday; the Cuban may be one of the very best junior middleweights fighting at this particular moment. Before this weekend’s events I would have favored him over anyone in the division not named Floyd Mayweather, but now I think the smart money says he losses against the few top junior middleweights.

I figured this fight on Saturday was ripe for Lara to take, a come-ahead style fighter versus a consummate boxer puncher. Alfredo Angulo is a stalker banger reminiscent of a prime Antonio Margarito who relies on his strength and toughness to score victories. Angulo’s defense is minimal but his hands are heavy. In my crystal ball, all signs pointed to ‘yes’ for a Cuban domination. I wasn’t exactly right, but I wasn’t totally wrong, either.

El Perro registered two clean knockdowns both in the fourth and ninth rounds, but the brilliance in precision that Lara displayed proved to be too much for the Mexicali, Mexico native. A double right left combination sufficiently aggravated a brewing orbital injury and caused El Perro to want no more part of the melee and he turned his back on the fight and referee Raul Caiz Sr. waved off the action in the tenth.

A quick look at the numbers – Alfredo Angulo doesn’t typically rely on his jab for anything important so it’s not a huge surprise here that he landed a paltry 9 out of 278 attempted, or 3%. Erislandy Lara often sets up his offense with a range finding jab then follows up with a precision strike with his big left, he scored 79 of a ventured 266, or 30%.

When it came to who was landing the harder shots, statistically it was relatively close. Angulo chasing and sometimes cornering the Cuban defector to land some digging hooks and Lara attempting to stay on the outside and pick off the incoming attacker. El Perro scored 31% of his power, knocking down Lara twice in the process, Erislandy, at a higher clip landed 56% of his own power and obviously doing some serious damage in the process.

With that big win, El Oro De Guantanamo becomes an (interim) titleist in the same division that Floyd Mayweather is readying to semi-unify when he takes on Saul Canelo Alvarez later this year. Does winning the WBA’s interim strap tell us that Lara will eventually get a realistic shot at winning the Mayweather lottery? I don’t think so, however, I was wrong about Floyd Mayweather not taking anymore catchweight fights and I was certainly wrong about him not fighting Canelo, so we shall see.

If you follow the career of Marcos El Chino Maidana you understand that he is a come-ahead slugger with limited defense and high power so you know that win lose or draw, you are always in for an entertaining evening when he’s up to bat.

Maidana did not disappoint when he took the fight from the very game Josesito Lopez in the sixth round of their scheduled 12. As usual, the Argentine was there to be hit but had his own return salvos that keeps his name relevant when it comes to securing big fights. A vulnerable champion is an interesting one.

I can foresee some big things for Marcus Maidana in the coming years, a clash with Adrien Broner seems likely, if he does well there I can easily see him being paired with his countryman, Lucas Matthysse or even with Floyd Mayweather before he ends his historical run.

1. Yuriorkis Gamboa is a fighter I love to watch. As far as natural athletic ability goes, I think that there are only a handful of other fighters that can be considered in the same bracket as Gamboa. Unfortunately, he hasn’t looked very good lately – his performance on Saturday was a bit disappointing if you considered yourself a fan of his.

3. I asked my magic 8-ball if Mikey Garcia would take apart Juanma Lopez and it revealed that “It is decidedly so.”.

4. Best quote of the night: “I would like to say hi to Al Hayman” – Erislandy Lara

5. Canelo is going to not lose any momentum in his career after losing to Mayweather.

6. I’m hoping for an upset in this fight, but I’m seeing Broner being too large for Malignaggi to deal with. Being a New Yorker at heart it hurts me to say this, but Paulie will get stopped at home again. As I’ve mentioned, further down the road I can envision Maidana getting a shot at the winner of this fight, likely Adrien Broner, which won’t pan out well for the Argentine.

7. Not So Bad Chad got stopped again. That will be all.

I’d like to thank everyone for stopping by today and having your late Brunch. Today I’ll be sharing a super simple recipe for pork chicharrones, a Latin favorite. What you will need: Pork belly cut into dice, fine sea salt, black pepper and a deep sided pan.

Take your cut up pork and add salt and pepper and let sit over night or at least 12 hours in the refrigerator. Turn on a high sided pot with a thick bottom on to low heat. Place around one cup of water with your pork and spread into an even layer. Cook for several hours, upwards of 4 to 5 or until the pork fat is melted and the pieces of meat are confiting in their own juices.

Turn your head up to medium high and the pork pieces will start to fry in their rendered fat, do this until crispy, flipping during the process, when done, lightly re-season and place on wire rack to cool and dry out.

I hope you’ve enjoyed my randomly configured words this week, tune in next time and we will continue to cuss and discuss all the biggest fights from in and around this sport we love so stay tuned! Another Sunday Brunch, along with cooking tips, tricks and know-how are headed your way! Until then, sante.